On the DD-963’s the galley was just above main control. The Waste heat boilers that supplied the steam were terrible and in combination with finicky evaps. we were on water hours often. This helped to develop a good working relationship between the night baker and the snipes.

Being a newer ship in the 80’s we just turned the potable water on and off from main control with the push of a button. When we were on water hours we just secured the potable water. The night baker would call down for water and we would turn it on. When he finished baking early in the morning he took a trip to Aux 1 and had his shower on the Evap Flat. It was one of the perks of having the night watches to get fresh baked goods delivered with butter.

Listening to that damn mixer run on the 20-24 sucked because he usually did not have anything ready by the time you were off watch. 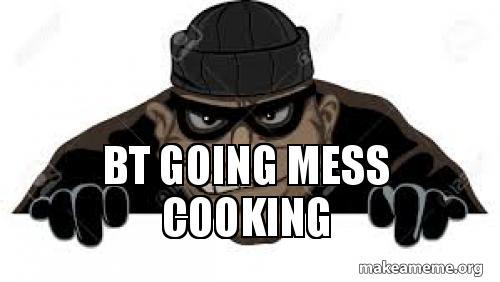 Yes Garland even if you took good care of us we stole from you any chance we got. Mess cooking snipes were moles and A gangers with reefer deck keys were not above reproach. I used my experience when I made Chief and was the mess caterer to harden the CPO mess from these raids.

There were occasions that we showed our love in different ways and one still sticks in my mind.Now this is no shit, I was eating early chow and the MSSN on the serving line gave me a very poor portion of the main course and we started having a discussion about it. I reminded him that I was a Second Class and I did not appreciate his disrespect. Things escalated and he got the best of me and Iside-armed my tray back under the sneeze screen like a Frisbee. It went past him at a high rate of speed missing him as I had planned.

I walked off and went down to main control and and told the Chief what had happened. About a minute later the MS1 shows up and says to the Chief ” Bowen just threw a tray of food at one of my cooks” Ol’ Chief Lurch looks at him and says “The food must not of been any good I have never known Bowen to miss a meal”

MS1 left main control muttering” I am going to write him up”. Chief says to me that I need to get in front of this and get something worked out with the MS1. I sat there on watch and decided to write the MSSN up for disrespect to a petty officer. The MSSN had had his problems and a recent Mast. I went to the MS1 after watch and apologized. He told me the MSSN was having problems but he had already written me up and turned in the chit it was out of his hands. I pulled the report chit out on the MSSN and I told him that I was turning it in too.

I was lucky we had CPO mast for report chits, I guess they decided it was offsetting penalties and dismissed both cases.

A Couple anecdotes by Garland Davis on snipes:

I was a CS3 serving in USS Vesuvius AE-15. WE were in our homeport of Port Chicago, California. We were leading stores. I was in the reefer decks stowing the frozen and chill items as they were struck below.

The escape trunk from the lower level of the engineering spaces opened directly between the reefer doors. Since the ship was on cold iron the hatch was open. An MM3 yelled from the bottom of the trunk, “Hey Davy, throw me something to eat.”

I ignored him and continued to work.

“Hey Davy, how about a piece of fruit. An apple or an orange. Something!”

I had just placed a crate of watermelons in the chill reefer. I yelled down the trunk, “Okay here it comes” and dropped a watermelon. I was picturing watermelon seeds and bits of rind all over the place.

The asshole caught the damned thing.

“Hey thanks, Davy. The first round is on me tonight.”

Another time, a couple of firemen climbed the trunk and absconded with a three-gallon container of chocolate ice cream.

The Captain, the CHENG, and the duty engineer were touring the engine room and discovered them in the evaporator flats eating ice cream with a couple of spoons the had stolen from the mess decks.

When asked where they had gotten the ice cream, they admitted to stealing it.

The CO said, “Well then, you’ll have to eat it.” He instructed the Duty Engineer to stay there and make sure they ate every spoonful of it and to ensure they returned the spoons to the scullery.

8 thoughts on “Cooks and Snipes Continued”