‘THE OLD MAN AND THE SAILOR’ 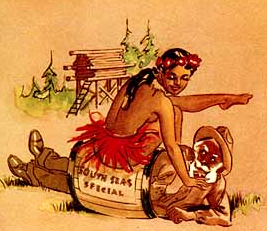 He was old and worn and a bit forlorn as he ambled through the park,

He spoke to me and I could see that his eyes had lost their spark.

His gait was slow and his voice was low as he asked to sit with me,

And I answered him with a friendly grin, The sittin’ here is free.

He gave a smile and we talked a while and his voice was rather weak,

For he spoke of times and other climes as old men often do.

That he’d earned his keep on the briny deep and paid his share of dues.

I asked if he would share with me some mem’ries from his career,

I’ve shipped on subs and oily tubs, on battleships and cruisers,

Ten thousand mates and I can state not one of them was losers.

LST’s on foreign seas, from Tarawa to Leyte,

You name it, lad, I’ve been there, from Alaska down to Haiti.

I saw one break apart one time and lose her gallant crew.

Marine Corps I took ashore on Tarawa and Truk.

Oh what the Hell, for quite a spell, I’ve had my share of luck.

One thing more, he said, before I move along,

There ain’t no air that’s quite as fair as the pipe of the boatswain’s song.

And the place to be is on the sea riding a fair sea swell,

So here’s to you and your Navy crew who take our ships to sea,

You’ve fought and died and never cried throughout our history.

You’re heroes all and ten feet tall and your spirits never lag,

You’re the nation’s best and you never rest in defense of our country’s flag!

He rose to leave and I believe that he seemed to move much faster,

His eyes agleam like a laser beam and his skin was alabaster,

He glowed at first then soon dispersed in a cloud of misty cotton,

A dream at most, perhaps a ghost, but not to be forgotten…

3 thoughts on “‘THE OLD MAN AND THE SAILOR’”