When the General Quarters klaxon sounds, whether for fire, taking on water, collision, crash on the flight deck, or preparing to engage the North Vietnamese on a run into Haiphong port, the adrenaline kicks in.  They say that when you are faced with a life or death situation, your training takes over and you don’t really think about what you are doing.  It all becomes muscle memory.  You are on autopilot.

It’s true, to a degree.  Training is just a safely repeatable replacement for near death experiences.

I remember a helicopter crash on the flight deck of an FF I was serving in.  The flight deck fire party had the situation in hand, but almost by the time the general alarm was finished we were crowding each other running fire hoses through hatches and doors to the flight deck and main deck.  Did I stop to think, I will have my galley crew breakout and run a fire hose to help?  No, the ship was in danger, my training took over and I reacted automatically.

In his book, “Outliers,” Malcolm Gladwell makes the case that becoming an expert at a skill requires 10,000 hours of practice.  Perhaps that is true, but one fire at sea or near death experience has a similar effect to those 10,000 hours, ingraining in your memory every action, no matter how small, that kept you alive.

And when any portion of that experience is recreated, the smell of smoke within the ship, the sound of artillery rounds alongside, the sound of machine gun bullets against the steel, the unthinking responses that save your life are triggered automatically as if they were forged by 10,000 hours of practice.

The hormones released by highly stressful situations instruct the brain to imprint those memories more deeply. We can thank evolution for that trick.  The pre-historic man who could best remember how he escaped an attack by a saber-toothed tiger had a better shot at surviving the next one.

Time seems to slow down in a car crash or when you are getting mugged or any casualty situation, at sea, with no one to call for help.  The adrenaline boost to your system triggers your brain into hyperactive memory storage.  Your mind and senses go into overdrive, absorbing every sensory detail with almost superhuman lucidity.

Because of this, an event that might only last a split second occupies as much mental storage space as a week or a month. Years later you can recall details, feelings, colors, smells, and sounds more vividly than you can remember this morning’s breakfast.

After decades you remember with perfect clarity every aspect of the event.  I remember being in the galley baking cinnamon rolls as the shells were exploding in the water and air around the ship.  I remember the Super Arboc firing chaff into the air to confuse the enemy fire control radars and the two gun mounts periodically going to “rapid continuous” fire. Forty-four years later I can smell the cinnamon and butter of the baking pastries.

You want to talk and re-talk it with your shipmates who experienced it with you.  You seem to live harder and truer than you ever have before.  The liberties were more intense, the drinks colder, the girls lovelier and yes, it felt good.  You felt so alive.  I remember thinking, “I wish I could live my whole life like this.”

It is the inability to ever match the excitement and stress of living that you achieved at sea and in war. It’s the letdown of having it end, you survived and you worry that a normal civilian life is just a slow letdown and a fade away.

Ask any sailor to tell you the worst experiences of their lives and they will tell you it was life aboard the ships, underway, and the war.

Now here is the confusing part.  When you ask them to tell you the best experiences of their lives, they’ll usually tell you it was life aboard the ships, underway, and the war.

This is why it is nearly impossible to talk to someone who wasn’t there, didn’t live it, and cannot understand.  That is why we talk among ourselves and rarely try to explain to civilians how we lived our lives and fought our wars.

High school classes schedule reunions about every ten years until there is no one left who cares.  Sailors and ships seem to hold reunions almost annually.  We go through the time between reunions living in two worlds.  One, the world of little excitement, of civilians and, the monotonous, never changing, nine-to-five job. The second world is in our minds and in our memories, once again looking into a westward sunset over a placid sea.  With the reunions you meet once again with the best men you will ever know and consider yourself fortunate to just be one of them.

You drink the beer and tell the stories reliving the worst and best experiences of your life.  You laugh with them at the stories you don’t remember being so funny at the time, and you shed a tear for those who have sailed over the horizon.

That my friends is PTSD or Post-Traumatic Stress Disorder and I am afraid we are all afflicted.

A review of the Novel: 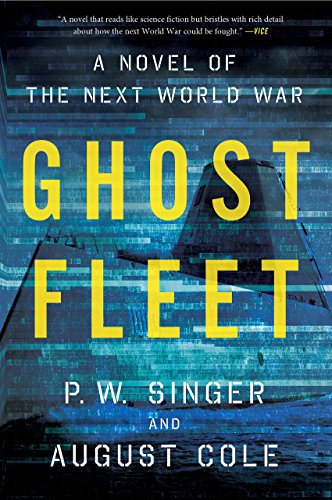 I just finished reading this book. My assessment of the novel.

The book is written in a manner reminiscent of Tom Clancy and W.E.B. Griffin.  With each chapter telling the events of differing protagonists all leading to the conclusion.  This method of writing tells the story of each character in a manner that supports the overall plot and story.  Clancy often left the reader hanging by not finishing a particular character’s storyline.  The writers here also leave some of the character stories untold.

Of all the books I have read since I caught the reading bug at age six or seven, this is only the second work of fiction that I have seen with footnotes or as the authors label them “end notes.”  The other was State of Fear by Michael Crichton. The reader  almost constantly has to refer to the endnotes to establish continuity between the present and the time the events in the book occurred.

The story line of the book is World War Three in the near future.  The authors never really define the exact decade.  It could almost be classified as a futuristic Science Fiction novel.  A Chinese/Russian alliance eliminates American resources in Space and attacks and occupies the Hawaiian Islands due to their superior technological abilities.  Out modern communications, radar, and other sensor technological innovations have all been hacked by the Chinese.  They manage to locate and destroy all Pacific Fleet Nuclear Submarines and almost the entire Pacific Surface Fleet.

The only ships free of Chinese hacks are those in the Ghost Fleet at Suisun including the USS Zumwalt.  A program is developed to recommission these ships and a fleet of disparate ships is assembled on the west coast while an east coast fleet transits the northwest passage opened by an Ice Breaker owned by the Country the was once Iceland.  The only non-nuclear Submarine is a Polish Diesel Boat.

In the meantime, U.S. service personnel and civilians conduct insurgency operations against the Chinese occupying Oahu.

A fleet of Auxiliaries, an LPH, and a Guided Missile Cruiser cobbled together from the Reserve fleet and led by the USS Zumwalt defeat a Chinese/Russian fleet of four carriers and other capital ships and with embarked Marines retake the island of Oahu and accept Chinese surrender.

None of the characters seemed to sleep and all were taking issued “Stims” or stimulated drugs to perform their jobs.

One passage of the book that appealed to me and I quote a female Marine Major, “Longboard, this is Nemesis, you are cleared hot…and may all our enemies die screaming.”

My final assessment of the book.  I will never get back the time I spent reading it.

The sailor sits at the head of the pier,

A desolate wayfarer lost and alone,

Forsaken, forlorn, no shipmates to toast,

Why does he sit there, clouds around him?

Secluded, outcast no ship for a home,

But arise and look seaward for a glimpse of gray,

He’ll find welcome there, no longer sad and alone.

From the ship comes, a ride to rest and home,

No longer does he feel a lonesome feeling

The liberty boat comes to take a sailor home.