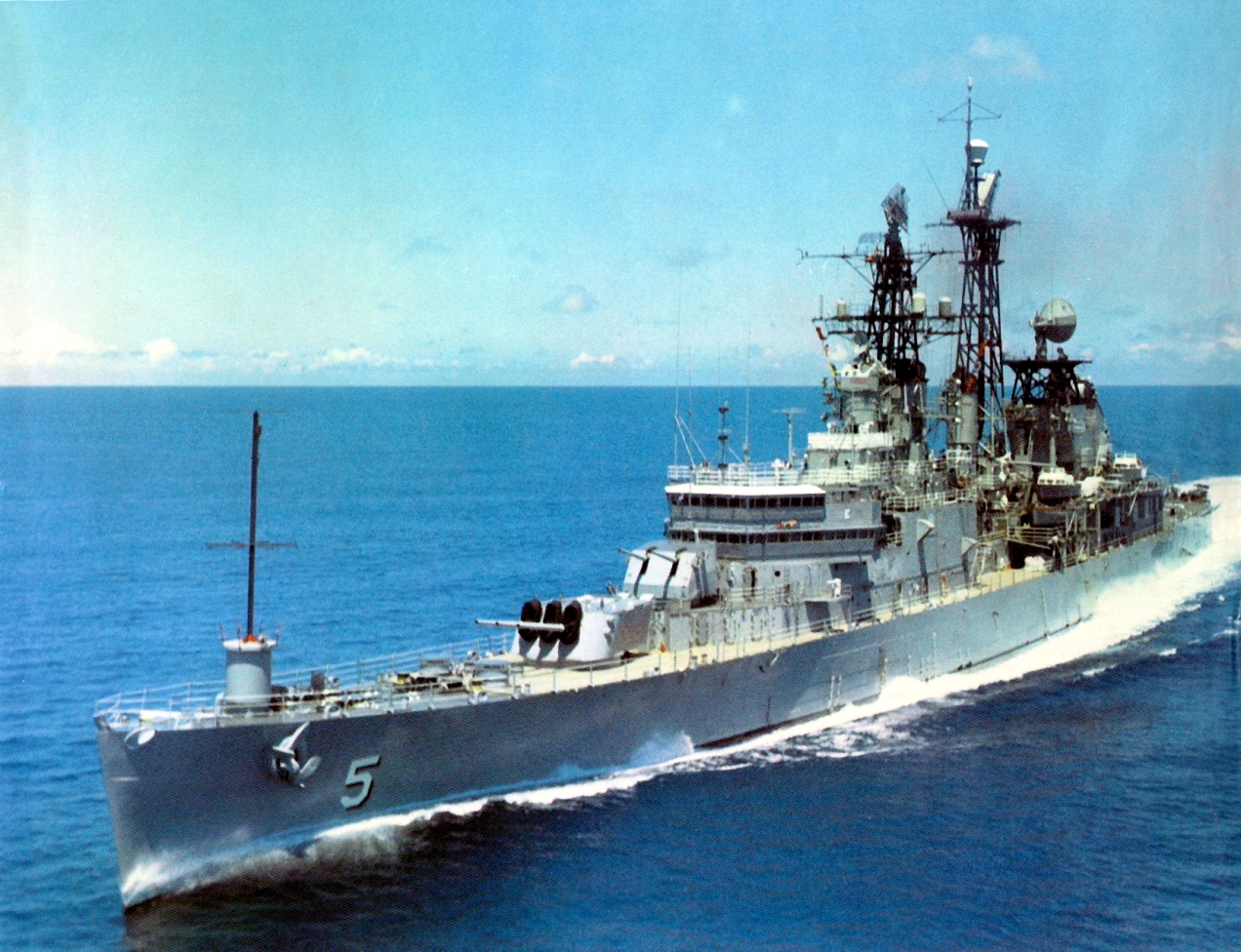 She was known as the “Okie Boat” by those who served in her and those of us who knew her. I was never assigned into Oklahoma City, but I have many friends and shipmates who were.

Oklahoma City was a Cleveland class Light Cruiser, designated as CL-91. Her keel was laid down in 1942. She was commissioned into active service in December 1944. In May 1945 she arrived in Pearl Harbor for a short stay before moving on to the Western Pacific where she would provide support to Carrier Task Group 38.1 during the Battle of Okinawa. She also provided gunfire support for the Marines ashore and patrolled Japanese waters during the latter days of the war. In September, she entered Tokyo Bay after a continuous seventy-six days at sea. Oklahoma City remained in Japan as part of the early occupation forces. In January 1945 she departed Japan for the United States and arrived in San Francisco in February and remained there until August when she moved to Mare Island for inactivation.

In March 1957, Oklahoma City was moved to the West Coast yards of Bethlehem Steel for conversion to a Galveston-class Guided Missile Light Cruiser (CLG). In September 1960, she was commissioned as CLG-5. She operated in the Pacific including two lengthy tours as Flag Ship for U.S. Seventh Fleet.  She was deployed to Yokosuka, Japan during the periods as flagship. Sometime after the Heavy Cruisers were all gone, she was re-designated CG-5.

She saw protracted service during the Viet Nam war. On 19 April 1972 the Oklahoma City was attacked by one of two North Vietnamese Air Force MiG-17s, flown by pilots Le Xuan Di and Nguyen Van Bay, both from the North Vietnamese Air Force’s 923rd Fighter Regiment. Each Mig was armed with two 500 lb bombs. Van Bay’s target was Oklahoma City. Van Bay made two passes on the cruiser, having overshot his target on the first run, dropped his two bombs near the ship causing light damage. One of the attacking Migs was reportedly shot down by an accompanying missile ship, USS Sterett (DLG-31). Another accompanying ship, USS Higbee (DD-806) was heavily damaged by a direct hit from the second Mig flown by pilot Le Xuan Di, which destroyed her aft 5-inch gun mount.

The Okie Boat returned to the United States for a final time in 1979. She was decommissioned in December of that year and placed in the reserve fleet at Suisun Bay. In January 1999, she was towed to Pearl Harbor, where some usable material from her was donated for use in outfitting the battleship Missouri (BB-63) as a museum ship.

The “Okie Boat” was then towed to sea and expended as a target during Tandem Thrust ’99 Naval exercise, southwest of Guam during February/March of that year. After first being used as a target for air-launched missiles Oklahoma City was sunk by torpedoes from the South Korean submarine Lee Chun. Oklahoma City broke into two parts as she sank beneath the waves.

Two friends and I went down to Hospital Point on the Naval Station Pearl Harbor to say goodbye to her as the tugs took her to sea for the final time. There were two others there for the same reason. They were friends of ours and had both served in the “Okie Boat” with each other and in other ships with me. It was a rainy morning and as we sheltered under a tree waiting for the tugs to bring her past, a taxi stopped near us. The driver got out and took a walker from the trunk and then assisted his passenger from the car. The passenger was an elderly man wearing a dress blue Navy Uniform with the insignia of a Gunners Mate First Class. He also had an Assault Boat Coxswain badge on the opposite sleeve. His service ribbons indicated that he had seen service in WWII and the Korean Conflict. He was wearing a Purple Heart, indicating that he had been wounded. He walked, with difficulty, across the road, in the misting rain,  to the channel’s edge and stood there holding on to his walker.

Shortly afterward, the tug came into sight and then the ship that we were there to bid farewell to. We walked over near the old gentleman as she came abreast of us. He struggled to stand upright at the position of attention, straightened his white hat, and rendered the hand-salute. I walked over to help him if he needed it. As the stern of the ship passed he groped for his walker and turned towards me, tears streaming down his face. He said to me, “I commissioned her in ’44 and decommissioned her in ’47.” She was a good ship and a great time in my life.”

I motioned my friends over and introduced them. I had a bottle of whiskey and plastic cups in the trunk of the car that I had brought for a farewell drink. I poured a drink for each of us and one into the channel and we toasted the “Okie Boat.” As she moved out of the channel.

I drove the old gentleman to the International Airport Holiday Inn. He told me that he had served in a Destroyer and an APA troop transport before Oklahoma City. He had come to Hawaii to say farewell to the ship and would leave for his home in Los Angeles, that evening. He also told me that his daughter had tried to talk him out of the trip and had been reluctant to accompany him to Hawaii.

We arrived at the hotel where his daughter was waiting in the lobby. She told me that she was uneasy about letting him go alone that morning, but he had insisted. She also told me that she had tried to change his mind but he had insisted on this trip to Hawaii. She said, “I have heard talk about the Oklahoma City my whole life.  I just don’t see what it is about that old ship. I just don’t understand it and him.”

I thought to myself as I walked away, “No, you don’t understand and never can understand.”

And they can’t understand.  Normal people don’t give any thought to a bunch of scrap iron.  To us, those old gray ships are a huge part of our life.  We reminisce about them, tell stories about them, dream about them, and we love them.  There is just no other way to put it.