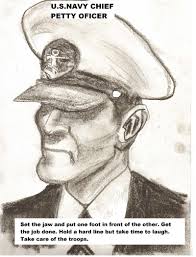 The first day I saw him was my first morning at quarters on my first ship. He appeared from nowhere, addressed the senior Petty Officers and in a matter of minutes was gone. After the soon to become familiar, “No dope, go to work”, I asked a shipmate “who was that?”, he answered – “The Chief”.

Although a brief encounter, it had a lasting impression on this young boot. My only previous encounter with a Chief was in boot camp at San Diego, CA as he either tried to climb down my throat, kick my ass or both. This guy was cool, aloof and appeared to be above that sort of intimidation. Dressed in clean immaculately starched wash khaki, his uniform was completely unadorned by anything other than those gold fouled anchors with the silver USN on them. No ESWS pins in those days. No name tag, didn’t need one, everyone knew his name – Chief.

Particularly interesting was his shoes, highly polished brown navy regulation oxfords – but wait. Instead of laces, these shoes buckled on the side, reminiscent of a sword toting swashbuckler. As he walked the heels of those shoes clip-clopped along the steel decks of that old tin can with the staccato cadence of a Tennessee walking horse. I was soon to realize that the Chief dressed on the very fringe of regulations.

Over time. I saw him in every prescribed uniform and variations thereof. Dress Blues, immaculately tailored. The blouse was lined in bright red matching the bright red crow and hash marks. Always a quarter inch of French cuffs extended beyond the blouse sleeve stopped off with gold cuff links fashioned in the form of a destroyer four-bladed wheel. Whites, long before the days of double knit, so white and stiff I think you would have to punch him in the middle in order for them to give to allow sitting – NEVER A WRINKLE. Black, brown or white, always those buckle down shoes that announced his presence long before you saw him. Row after row of ribbons awarded for achievements during the Korean War as well as the Viet Nam conflict were ever present. On the rare occasion that his presence was needed in the main spaces he dressed in starched and pressed dungarees, khaki belt and combination cover with well-blackened boon dockers.

I saw very little of the Chief as a matter of routine, morning quarters, or an occasional passing on deck that was it. He never spoke to anyone other than the First class and occasionally to a second class. I believe the division officer had to put in a special request chit for a word with him. The scuttlebutt was that this guy was a Machinist Mate extraordinaire, a supervisory expert and enjoyed a notorious service reputation of being a good shit. His antics ashore were legendary.

Through watching him I learned that sailors belong on ships and ships belong at sea; however, when those ships are in port, sailors belong ashore. Under him, we all learned to work hard in order to have time to play hard. I also learned by watching the Chief that if you were an excellent performer and knew your job, that you could just about write your own ticket. Nobody messed with a professional sailor and that service reputation was everything. You wanted to be known as a good shit.

Over the course of two years that I served with him, the Chief probably didn’t say half a dozen words to me directly; however, being in this man’s silent presence gave me an excellent example of what I wanted to make of myself and my Navy career.

I often wonder what I would have done had I not been privileged to have served with the Chief. Moreover, are there examples like him hiding out there for today’s young impressionable sailors to emulate? For their own good and that of the modern Navy, I truly hope so.

David “Mac” McAllister a native of California, now resides in the Ozark Mountains of Southwest Mo. Having served in Asia for the majority of his 24-year Navy career, he now divides his time as an over the road trucker, volunteer for local veteran repatriation events and as an Asia Sailor Westpac’rs Association board member and reunion coordinator. In his spare time, he enjoys writing about his experiences in Westpac and sharing them online with his Shipmates.

One thought on “Silent Mentor”