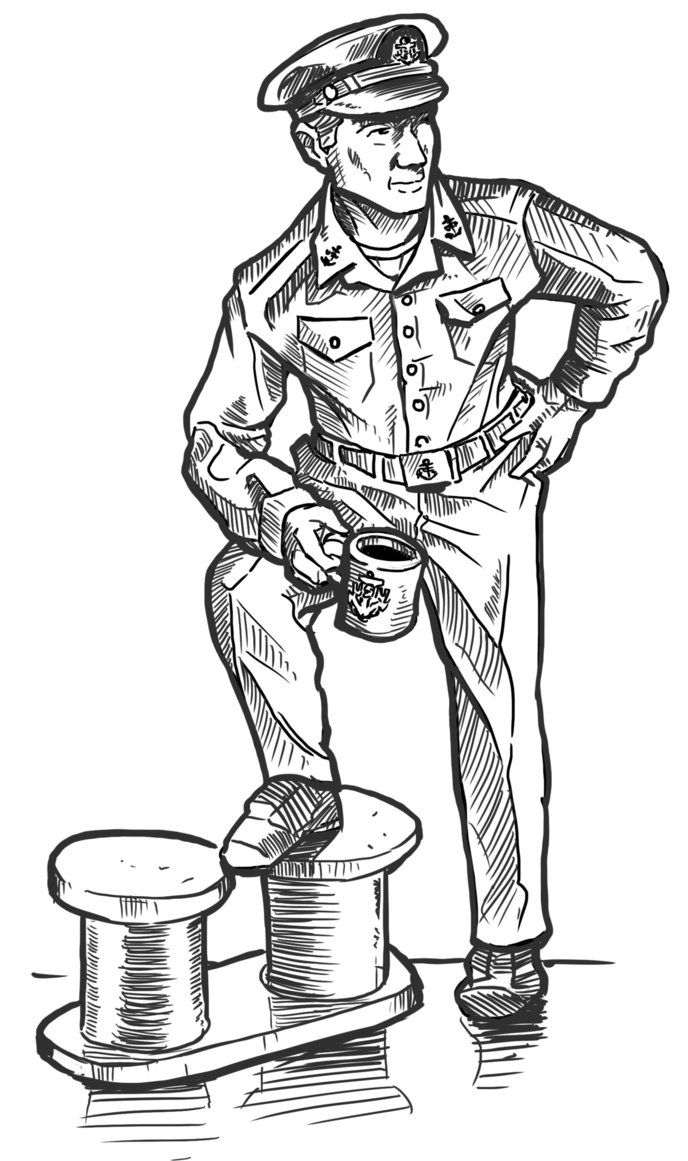 Now he’s an old sailor, his hair and beard have both turned grey
And he sits there on the pier and gazes out across the waves
And he wonders what has happened to the Navy that he served
And he wonders why its leaders have lost all their God damned nerve

For he sailed in the Navy when man was free to be
A man, and not be treated like a child at mother’s knee
He showed respect to others and was shown it in return
But he sees what his Navy has become, and for the past he yearns

He never had to mind his tongue, when he sailed across the waves
And he learned his salty language from the bravest of the brave
He fought in countless bar rooms, more than once his blood has flowed
And he’s roamed through the parts of town where all the red lights glowed

He wore blues, whites and dungarees, not garb of mottled hue
And Dixie cups, worn jauntily, were favored by the crew
He might not have many ribbons, but those he had, he earned
Not like the world today where everybody gets a turn

He didn’t need some one to hold his hand on liberty
For he, and all his brethren, were the masters of the sea
And he sheds a tear to see the modern Navy of today
Because he doesn’t understand how things could have turned out this way

For now political correctness is the one and only rule
And the leaders that he once revered have been replaced by fools
And slowly, one by one, he’s seen the proud traditions die
It breaks his heart to see it, and he rages at the skies

Now he’s an old sailor, his hair and beard have both turned grey
And he sits there on the pier and gazes out across the waves
And he wonders what has happened to the Navy that he served
And he wonders why its leaders have lost all their God damned nerve

She was a goddess. Light red hair, skin as white as cream and freckles under her eyes. She walked back to my seat which was on the isle. “Are you an American?” She asked. “Yes.” I replied. “May I sit with you?” She asked. “This is boring.” “Of course.” I replied.

It was July of 1985 and I was on a flight out of Tokyo for Manila. I hadn’t taken leave in two years and had been rode hard and put away wet. I needed a break and the Commodore gave it to me. Manila was the place to go and the Manila Hotel was the place to stay.

She worked for Pan Am in New York and was on her annual fly anywhere in the world for free vacation. I don’t think there were 75 people on that 747. We drank and talked having a good time. She suddenly looked at me and asked; “are you a member of the “mile high club?” I panicked. “What the Hell is the “mile high club?” I thought to myself. I’m a sailor. I’ve steamed from the West Coast of the United States to the East Coast of Africa. Am I supposed to know what the fucking “mile high club” is?

I think the stewardess’ knew what was going on from the smirks on their faces. We went back to the toilet twice.

She was the adventurous type. No hotel, no reservations for anything, just wing it. I kind of liked that. I told her she should stay with me. I had reservations at the Manila Hotel, I knew Manila very well. I knew where to go and where not to go, what to say and what not to say. She would be safe with me. She accepted.

Funny, as gentle as she was she wanted to watch a cock fight. I took her to one. Bought spurs for both of us as souvenirs. Still have mine, oil it down once in a while so it doesn’t rust. Sharp as a razor. I’m sure she still has her’s where ever she is. We spent a glorious week together. When it was over, it was over. She went back to New York and married her boyfriend. She was 24 and I was 34.

After all the time spent in Westpac and the shock of being stationed in South Texas, David Wright transferred to the Fleet Reserve in 1993 after 25 years of service. He calls Corpus Christi home. Is employed with the NAS Fire Department as the fire extinguisher/fire suppression systems servicer. He spends much of his off time reloading and shooting with his young son and sitting at the mall looking at young girls.