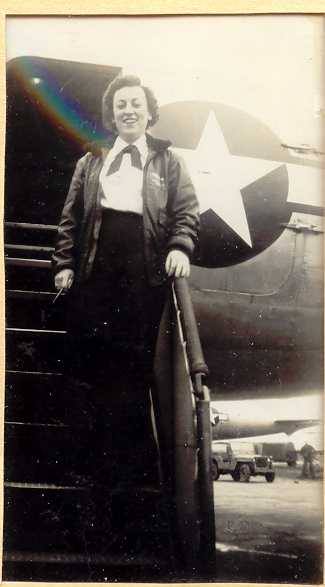 The following is a short history of Mom’s career in the United States Navy in her words. — Kurt Stuvengen

My older brother by 10 years had joined the Navy when he graduated from High School and was unable to find a job because of the Depression. As a young child, I was very impressed with my “sailor brother” and the friends he brought home with him on leave. That love of the Navy has not left me to this day.

December 7, 1941, was my 17th birthday, and before the day was over we knew in our hearts that it meant America would soon enter the War. I can vividly remember making the statement that if they ever started a branch of the Navy for women, I would enlist. Of course, they did just that in July 1942, but unfortunately made the ruling that you had to be 21, or 20 with a parent’s permission before you could join. At the earliest possible moment, three months before my 20th (1) birthday, in September 1944, I took my physical and signed the papers to become a United States Navy WAVE.

My father signed for me, feeling that I must be serious, not having wavered for nearly three years, but my mother was dead set against it. In fact, she took to her bed with what we called the “vapors” for three days before I left for boot camp. My brother, who had re-enlisted earlier, was also against it, as were many people, especially the majority of servicemen. Family pride won out on that one.

I took my basic training at Hunter College in New York, and for a young, sheltered 20-year old from New England, it was a real education. As tough as it seemed at the time, I have never regretted a day of it. We had bits and pieces of training in all the fields open to women at the time, and I desperately wanted to be either a Control Tower Operator or a Link Trainer Instructor. Unfortunately, they wouldn’t even consider me because of my “strong Boston accent”. I then said, OK, but I wanted anyplace except Washington, D.C. and any job except Yeoman. Of course, because of my secretarial training and work experience, that is exactly what I did get.

I was assigned to Naval Communications and ultimately became Yeoman to the Legal Assistant to the Chief of Naval Communications. One of the more interesting assignments we had during my tenure was preparing the paperwork for the Captain, who was my boss, to give his daily presentation to the Congressional Committee which was holding hearings on how and why the Pearl Harbor disaster happened.

In due time, that Captain went on to another assignment, and his replacement was another Captain, one who had spent the entire war commanding ships at sea, so I was the first WAVE he had ever had under his command. He was a wonderful man to work for, and soon adapted himself to dealing with a “woman sailor”.

One of the most popular assignments for WAVES was that of Flight Orderly with Naval Air Transport. Because of that, the billets were filled quickly. When we enlisted we enlisted for the “duration and six months”, and when the war was over, it was first in and first out on a point basis. Because of this Flight Orderlies were among the first to go, and the ranks thinned quickly. Those of us who were lower on the release list were given the opportunity, by testing, to go to F.O. School at Patuxent River, Maryland for six weeks, and were then sent to the various squadrons. My assignment was Moffett Field, California, and for the rest of my tour, I flew between Moffett and Honolulu. This was great duty. Our flight schedules were erratic – sometimes we would fly over and fly back again 8 hours later. At other times, we would have several days layover and were able to spend time sightseeing and swimming off the sunny beaches.

I was released in June of 1947. I went back to my home in Massachusetts to visit my family, but soon returned to San Francisco, and went to work for Standard Oil Company of California. I stayed in the Reserves until 1949 and then took my discharge. In November of 1956, I met my husband, who was in the Naval Reserve (he finally retired in 1986 as a Chief Boatswain’s Mate, with 43 years of service). I then rejoined and we served in the same unit at Hunter’s Point Naval Shipyard in San Francisco. We were married in 1957 and our first son was born in 1959. In those days, of course, we were automatically discharged when we became pregnant.

In 1965, we moved to my husband’s hometown in Wisconsin, and both became active in The American Legion. Over the years, I have served as Post Commander, State Historian for 10 years, and National Historian for 1996-97.

Bobbe…We wish you fair winds and following seas, deep green water under your bow, your main rifles trained in the posture of peace and a gentle breeze at your stern. — Garland Davis