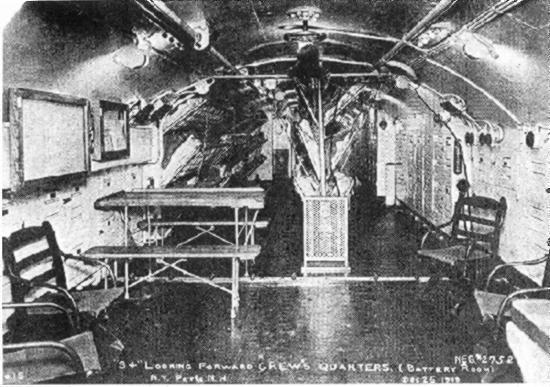 There was a point in time… All you lads who rode submersible iron will recognize the point… A point where you could tell exactly how long you had been out by the diameter of the salt stain in the armpits of your last clean dungaree shirt. The point where all your fellow inmates smelled like the inside of Olga Korbut’s gym shorts.

At this point in the interest of human preservation and fear that his ship was taking on the internal atmosphere of the monkey house at the Chicago zoo… The Old Man would lift water restriction and allow ‘white light’ in the berthing compartments.

Men, who had lived and interacted in the dim glow of night-vision-preserving red light, got a good look at each other for the first time in weeks. It wasn’t a pretty sight…

“Jeezus, have I been living with these animals?”

The after battery looked like a garbage dump. Shredded ration boxes, stray socks… Magazines loaded butt kits… Sour towels and a collection of dirty laundry that had matured to the point it was turning into Limburger cheese.

It was a point far past the day we had wrapped ourselves around the last of the potatoes stored in the showers. The only visual evidence of their previous existence was the wadded up gunny sacks carpeting the deck of the after battery head and whatever GDU-delivered peels the fish off Nova Scotia were dining on… The ‘Idaho’s Best’ rug in the sonar shack was the residual product of some previous deployment.

For those of you who never rode Uncle Sam’s under seas technological treats, a smoke boat shower was an aluminum box the size of a coffin designed for Mickey Rooney. It had a shower head that delivered semi-hot water at the rate of five peeing hummingbirds and a shelf for soap that could leave a very distinctive purple mark on your upper biceps if the boat took a roll during occupancy… And a deck drain… A hole through which amazing things could appear if anyone put pressure in number two sanitary tank without shutting the required gate valve and quick throw.

Even though you had to Crisco your ass to turn around in the damn thing, it was the closest thing to heaven a diesel boat sailor came in contact with at sea.

Everyone shucked his dungarees down to his skivvies… Grabbed a towel and his ‘douche bag’ (sub sailor for shaving kit) and got in line. While guys rooted through side lockers for their shower gear, towel fights broke out… Not Cub Scout towel flipping, serious heavy-duty towel popping. The kind that can take little chunks of hiney if you couldn’t move and fend off the shot. Grown men laughing and popping each other with towels… Underseas recreation at its finest.

After a two-minute soap down, scrub and a rinse, men would lather up and scrape off weeks of beard accumulation. Lifers who never shelled out for razor blades would say,

“Hey, kid… How about seconds on that blade?”

Cheap bastards… Same guys that ran out of sea stores smokes after two weeks… Same guys who would wander around Bells filling their glass from any available pitcher. They are probably millionaires now and live by tax loopholes.

Bottles of Vitalis, Lucky Tiger, Mennen, Old Spice, Aqua Velva, and God knows what else, appeared from side lockers. In thirty minutes, the entire boat smelled like the parlor of the best whorehouse in New Orleans.

Adrian Stukey would break into a Ray Charles song and do his aboriginal dance… He employed footwork only known to Stukey and three Congolese witch doctors. The man had moves Fred Astaire, and Gene Kelly never thought of… Sort of reminiscent of an electrocuted orangutan, mixed with the mating dance of the Australian Dingo eaters.

By some miracle, clean white skivvy shirts appeared. Some with the names of guys, who rode the boat five or six years previously, stenciled across the back.

“Musta been some boat sailor.”

“Yeh, I guess… What’s it to you… You writing a gahdam book?”

Nah… Who’d give a damn about reading stuff about this jacked up bunch of idiots? Who’d believe it? Once upon a time, I lived among people who volunteered to live like primates in an iron septic tank with lousy air, shared sleeping arrangements, had at least four leaks (air, oil, water, and security), made weird sounds, and agitated like a warped washing machine, for less money than you could fit into a gahdam gumball machine… Who’d read crap like that?

When the Goddess of Personal Hygiene looked down and blessed the residents of the roaming hotel SS-481… It was good.

It was also good to live among men who were right where they wanted to be… Nobody chloroformed them and hauled them off to New London. Nobody ever called their number at the Selective Service Board. They volunteered… Every gahdam one. Most of the world didn’t even know they were there… Boats… Little primitive communities of the finest men I’ve ever known that lived in metal containers and took them to sea. There must be a story in there somewhere.

The next time you see a Texaco tank truck rolling down the highway, just for a moment visualize it a couple of hundred feet underwater… Then picture thirty or forty happy-go-lucky half-naked men singing, doing silly dancing and towel fighting inside… And willing to do whatever it took to keep nasty folks with weird political agendas from crawling through your bedroom window. Those lads were my shipmates.

Author’s note: In the ensuing years, service under the sea has changed for the better. Lads today are not known as ‘pig boat sailors.’ Today’s modern submersibles are more conducive to proper personal hygiene, grooming and gentlemanly attire. After a hard day of fission monitoring, switch flipping and gauge dickering, our present day subsurface bluejacket may attend a lecture on the molecular configuration of high-density hydrocarbons emanating from the planet Mongo. He and soon to be, she, can opt for a live concert… Polo… Fencing or a little commingling in a hot tub… Mint Juleps followed by a shrimp cocktail precedes the evening meal after which those not engaged in ship’s work or on watch are free to attend a visiting Broadway stage production or enjoy a Swedish massage in the crew comfort compartment.

Before retiring, he or she fills out his or her ‘What I like about Naval Service’ questionnaire which is handed to the first or second class bedtime story petty officer… Then after a telling of the ‘Three Bears and the Call Girl’ story, they say their ‘God bless Hyman Rickover’ prayer, drink their hot cocoa and turn into their Martha Stewart approved poopy sacks to dream of super computers in accordance with currently prescribed force policy.