These days, tattoos are so commonplace in the U.S. military that every branch has its own policy as part of its uniform regulations, but a few years ago that wasn’t the case. The U.S. Navy, however, has a long tradition of tattoos.

Here’s the meaning behind a few of the classics:

A tattoo of a fully-rigged ship from the age of sail means the sailor had been around Cape Horn, the rough, stormy waters around the southern tip of South America. A fully-rigged ship is one with three or more masts, square sails fully deployed.

The star is a symbol of a sailor always to be able to find his way home. The nautical star is a five-pointed star in dark and light shades counterchanged to resemble a compass rose.

Sailors can wear the Shellback Turtle when they get initiated into King Neptune’s Court after crossing the equator. If you’re unsure what exactly this means, We Are The Mighty has an explainer for you:

The crossed cannons mean a veteran has seen military service as a sailor.

Sailors earn a new swallow tattoo for every 5,000 nautical miles traveled, which is about 5,754 regular miles, roughly the distance between New York City and Tel Aviv. The circumference of the earth is 21,639 nautical miles, just about 4.16 sparrows.

A single anchor means the sailor crossed the Atlantic or has been a member of the merchant marine, a fleet of civilian ships that carries military cargo. In wartime, this fleet is mobilized to carry war materiel, including troops and supplies.

During World War II, the Merchant Marine took a beating with high casualties, entering the European war long before the United States itself. Since the U.S. was delivering war supplies to Britain through Lend-Lease, Nazi u-boats targeted U.S. shipping bound for the UK. The Merchant Marine casualty rate was 3.9 percent, whereas the Marine Corps’, the next highest, was only 2.94 percent.

7. Rope on the Wrist

A knot of rope on a sailors wrist identifies him as a deckhand, someone who maintains the hull, decks, superstructure, mooring, and cargo handling. Deckhands are still common in ocean-going vessels, though they’re far less likely to be maintaining wooden ships. 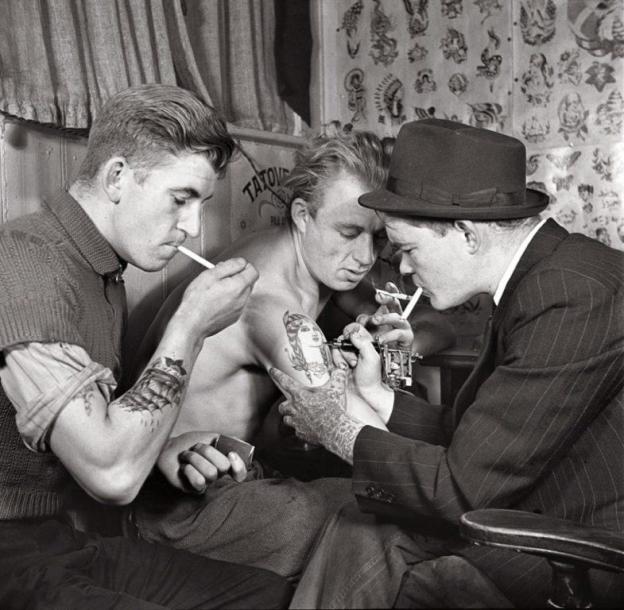 Hula girls signify the sailor has been to Hawaii.

Sailors wearing the crossed anchors on the webbing between their thumb and index finger are identifying themselves as boatswain’s mates, the guys who maintain the deck and take care of smaller boat operations and damage control parties.

These words are a charm spelled out on the four front-facing fingers on each hand. Sailors hope it brings them good luck while gripping the rigging. Holding fast means the sailor isn’t going to let the line go, no matter what. Sailors were a superstitious bunch and life on a sailing ship was tough (to say the least). Anything that gave them the edge in saving their own lives was worth doing. 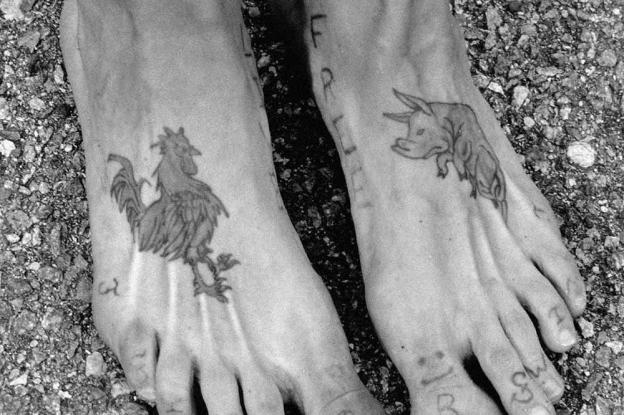 The foot tattoos of pigs and roosters were worn by sailors in WWII in the hopes it would keep the sailor from drowning. The Navy shipped these animals in crates at the time. When ships went down, the crates floated, and the animals inside would sometimes be the only survivors

Another good luck charm that allows a sailor to find his way home.

Worn on the soles of a sailor’s feet, these are thought to ward off sharks

14. Dagger through a Rose

This tattoo means the sailor is loyal and willing to fight anything, even something as sweet and beautiful as a rose

Wearing a dragon means the sailor has served in China. 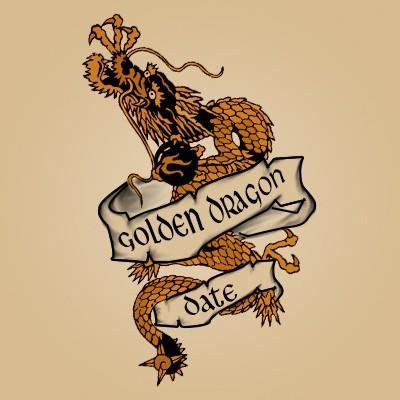 When a sailor crossed the International Date Line, he earns the right to wear the Golden Dragon tattoo. The International Date Line is the imaginary line of longitude that separates two calendar dates. When someone sails from East to West, they set their clock back one hour for every 15 degrees of longitude they pass. When they pass the date line, they’ve gained a full 24 hours.

Sailors tattooed with harpoons were serving or had served in a whaling or fishing fleet.

German sailors in the 1930s being addressed by King Neptune while “crossing the line.”

Another badge of honor earned for crossing the Equator.

The palm tree has two meanings, depending on your navy. Sailors in the Royal Navy during World War II could wear it after sailing on Mediterranean cruises. It can also be worn by U.S. sailors who served in Hawaii.

Women getting tatoos.  In their own way, each of these women was a pioneer of body art at a time when only criminals, sailors, and lowlifes sported tattoos.