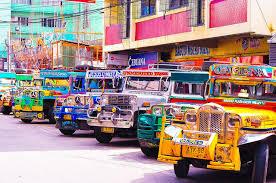 Jeepneys, the flamboyant passenger vehicles of the Philippines, are nearing the end of their reign as the “Kings of the Road.”

Government moves to overhaul outdated public transport, making it safer and more environmentally friendly, will put the brakes on a mode of travel that has long been the surest and cheapest option in a country of 105 million people.

Another of the things that made the P.I. a memorable place to visit. Who of us hasn’t participated in a Jeepney race over the hill to the Barrio? Pile into two Jeepneys and promise a hundred extra Pesos to the first one to reach the Irish Rose. Side by side, hanging on for your life, with one wheel half off the cliff as they made the curve by the graveyard.

Did we really do that shit? Yes, that and more. Jeepneys were the chariots that transported us from a place where we were responsible, hard-working adults to a place where we reveled in the delights offered, a world that is rapidly changing. It was a place where we could go batshit crazy and a jeepney would take you there for about the cost of a bottle of beer.