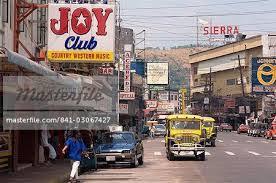 Was it a place that had a reputation that was overly exaggerated by the thousands of Sailors and Marines who had frequented it? Or maybe it was just a Dream!

In actuality what it WAS was a town in the Philippines with a seemingly unending row of Night Clubs and other establishments located in a tropical paradise that was situated just outside the Gates of one of the most critical and important U.S. Military Bases in the World. Most all of the Bars and Nightclubs there came complete with some of the best music I’ve ever heard anywhere, and each club had a bevy of beautiful women present who seemed to be almost Angelic……all there to provide company and comfort to lonesome sailors who had been too long at sea, and to help them relax and feel human again.

Each Night it was much like a carnival atmosphere for Adults Only…Music blasting from every doorway, Glaring Lights, Jeepneys and Tricycles belching Carbon Monoxide fumes and sounding their horns while transporting folks all around town, the Spicy Aroma of the many different foods being prepared along the sides of the road filling the Air, Occasional fist fights and altercations between Sailors and Marines that generally lasted no longer than it took for each side to realize that it was much more fun to drink beer and get laid than it was to fight with each other. Then there came the PARADE shortly before midnight..a nightly event where all who were going back aboard the base needed to get it in gear lest they wind up being too late for the Gate, the rest finding their way to other domiciles in order to spend the night with their HoneyCo.

Each Day awakened with the sounds of roosters crowing, and the hawking of vendors selling cold Orange Sodas and such to soothe the thirsts of many who were making their way back to their Ships after partying too heavily the night before.

For the record, I for one think it was WAS Paradise…..true, it was a bit “Rough around the Edges” type of Paradise, but nonetheless, it was indeed what I suppose many would classify to be a Paradise,

There was absolutely no place like it on earth…… Good People, Good Food, Cold Beer, Smiling Faces, Beautiful Women… and plenty of them, almost everywhere you looked. Not only were there many beautiful women there, most everyone encountered was super nice and hospitable.

I vividly recall my first trip there, I was but a young Sailor experiencing his first exposure to a foreign port, upon exiting the gate we were first greeted by the almost gagging smells emitting from “Shit River”, a stagnant and barely flowing open sewer with a bridge over it that connected Olongapo to the Base, a river in which kids dove from small boats into the rancid water in order to retrieve coins tossed to them by the sailors crossing the bridge into town, and then finally…..after listening to all the stories from my shipmates for many weeks……I entered Olongapo for the first time and I could not believe my eyes. Oh sure I had been told many times by the Old Hands of the many unique attractions of this Port but quite frankly I believed them mostly to be nothing but overly glorified memories of the ones relating them to me, WOW was I ever wrong, and I discovered that ALL they had told me was True.

In the later years of my Naval Career, while crossing the pond we often “Pumped Up the Newbies” with tales of what they could expect when we hit Subic Bay. It was during these times that I remembered back to when I was once like these young Sailors…..and now it was their turn, many of them had never even left their hometowns, and now in what seemed like they went at warp speed after exiting Boot Camp, they found themselves riding a fully armed US Navy Warship manned by a crew of seasoned sailors, churning across the big pond and traveling into adventures that they could never really conceive of without actually experiencing them. In being there with these young Sailors as they first exited the Gate at Naval Station Subic Bay, then crossed the RIVER and “The Bridge” that in many cases initiated their graduation from Boys into Men, I found great pleasure in escorting them into one helluva Port and at the same time recalling the days when I had first had that amazing experience.

Now unfortunately, gone are the days of Seventh Fleet Liberty in the World’s Greatest Port…..now changed and “Civilized” immeasurably from the way it was back in the days when young Sailors and Marines first met Dr. San Miguel, Fell in Love way too many times, and experienced the greatest Liberty Port in the World….Those days that I experienced long ago were extremely happy days, and when we got Liberty it generally involved maximum exposure to lots of Mud, Blood, and Beer as the Streets were unpaved and things got really WET and WILD during the Monsoons. They were happy days spent with beautiful people in a place that seemed to me to be a Paradise on Earth! I always have, and always will love ALL of the Philippines and I still visit there as often as I can.