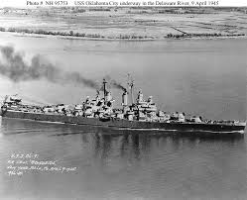 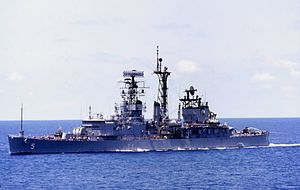 The USS Oklahoma City was designed with a multi-purpose gun battery capable of performing anti-ship, anti-shore and anti-aircraft roles. It served all of these duties in World War II. During the Vietnam war the ship participated in naval gunfire support (NGFS) and attack missions in south and north Vietnam.

Most of the records of the ship’s gunfire missions have survived. During WWII gunfire data were reported in monthly War Diaries. Records of early gunfire missions in Vietnam are sketchy. At first gunfire mission data were recorded in the annual Ship’s History report, but only the first missions were recorded. After that there are no records except the note that the ship conducted NGFS missions on certain dates. Starting in March 1966 the Navy began compiling Combat Naval Gunfire Support File (CONGA) records. These are available through the US National Archives, and include all NGFS activity for all ships through the end of the Vietnam War in 1973. From these records I have compiled an almost complete record of the ship’s gunfire missions. This complete gunfire support record for the USS Oklahoma City is available in PDF and Excel formats.

The USS Oklahoma City CL-91 was commissioned on 22 December 1944. It conducted shakedown and training cruises through June 1945 when it entered the Pacific war theater. The ship was involved in combat operations in June, July and August of 1945. The table shows the ammunition expenditures recorded in the ship’s war diaries.

Most records did not indicate the type of ammunition so these are listed as “Unknown” type. BL&P were blind loaded and plugged training rounds. BL&T were blind loaded and plugged rounds with a tracer. These were training rounds fired on the first shakedown cruise. HC was a high capacity or high explosive round with a large amount of explosive and a nose contact fuze. The AAC antiaircraft common round had a mechanical time fuze or a variable time (VT) proximity fuze. ILLUM were illumination rounds that carried a flare that was deployed to illuminate night scenes. I have no idea what BLOT and MK 53 rounds were, but there were very few of these.

Almost all of this ammunition was expended in training exercises that were held nearly every day. Searching through the War Diaries I found only one record of actual combat. On 18 July 1945, the USS Oklahoma City CL-91 joined with the USS Topeka CL-67, USS Atlanta CL-104 and USS Dayton CL-105 for shore bombardment of a radar installation at Nojima Saki (Nojimazaki) Japan, south of Tokyo near the entrance to Tokyo Wan. The Oklahoma City fired 60 rounds of 6″/47 HC projectiles.

Oklahoma City was assigned to antiaircraft protection and long-range radar search for fast carrier task forces for most of its time in the war. There were many instances when enemy aircraft approached the OK City but in every case, they were downed by combat air patrol (CAP) or other ship’s antiaircraft guns before they came in range of the Oklahoma City’s guns. This was especially true in the last days of the war when CAP downed 10 planes on 13 August and another 5 on 15 August, the last day of the war.

One other interesting bit of information about naval gunfire was recorded in the 26 July 1945, War Diary entry. The ship periodically tested the ammunition it received, and it found that found 44% of VT fuzed 5″/38 AAC (antiaircraft common) ammunition was defective. The VT fuze was a radio proximity device that detonated the shell when it passed close to a target – or at least it was supposed to.

The graph shows when the ship conducted gunfire missions. The ship was stationed in California in 1967 and most of 1968. The ship conducted a large number of NGFS missions in 1969. Much of 1970 and 1971 was spent on PIRAZ and SAR (search and rescue) stations in the Gulf of Tonkin off North Vietnam. Late 1971 and early 1972 the ship was “radar hunting” off the coast of North Vietnam. Many of the gunfire missions in 1972 were shore bombardment along the coast of North Vietnam during operations Freedom Train and Linebacker.

The CONGA records include 1099 NGFS and shore bombardment records between 2 March 1966 and 4 December 1972. The table shows the ammunition expenditures recorded in the CONGA records.

If the approximately 420 5″/38 and 800 6″/47 rounds fired before the CONGA reports started are added in, the ship fired about 18,080 5″/38 and 31,370 6″/47 rounds in combat during the Vietnam War, or a total of 49,450 rounds. This does not include ammunition expended during training exercises or readiness qualifications. I have no records of ammunition expended for training and qualification, but we didn’t do this very often. For the data in the CONGA records, the average number of rounds fired per fire mission was about 44 rounds, although the numbers ranged from 1 to 529 rounds permission.

The HC rounds had 7.86 pounds of Explosive D in each 5″/38 and 13.22 pounds in the 6″/47 projectiles. They had contact fuzes and the main effect was the explosion and shrapnel. The 6″/47 armor piercing rounds carried only 1.95 pounds of Explosive D and were used against hard targets like concrete bunkers. The VT rounds were HC projectiles with radio proximity fuzes that would detonate the round in the air. They were used to shower shrapnel on troop concentrations in the open. AA Common rounds were similar but they had mechanical time fuzes that detonated above the surface. They were also used against troops in the open. Illumination rounds carried parachute flares that were deployed high in the air to light up the countryside at night. The white phosphorous (Willie Peter) rounds exploded and sprayed burning phosphorous. This produced a large cloud of smoke. They carried little explosives and were mainly used for spotting the initial rounds of a fire mission. After the spotter corrected fire onto the target another type of round would be used for effect. Willie Peter could be used to create a smoke screen, and it was effective against personnel. Rocket Assisted Projectiles had a reduced explosive charge and a small rocket in the base. After they left the gun barrel the rocket fired to extend the range. They were used for targets outside the normal range of the guns.

Based upon the amount of explosives per round and the numbers and types of rounds listed in the CONGA data, the OK City pumped about 545,553 pounds (272.8 tons) of explosives into the jungles of Vietnam. That is just the weight of explosives in the shells. The total weight of the projectiles was approximately 4,230,723 pounds or 2,115.4 tons. That’s about the weight of some of the destroyers we operated with, all squeezed out of two 5″ and three 6″ gun barrels!

H&I was “harassment and interdiction.” We pumped bullets into the jungle on “suspected” targets like trail junctions during night time. The ship took up a position off shore and about every 30 minutes or so we would fire a bunch of projectiles. The CONGA data records that we fired 7,938 5″/38 and 10,921 6″/47 shells for H&I, or 18,859 total. That is 39.1% of the total rounds in the CONGA record. We fired 301 H&I missions, so 27.4% of the total missions did not have real targets.