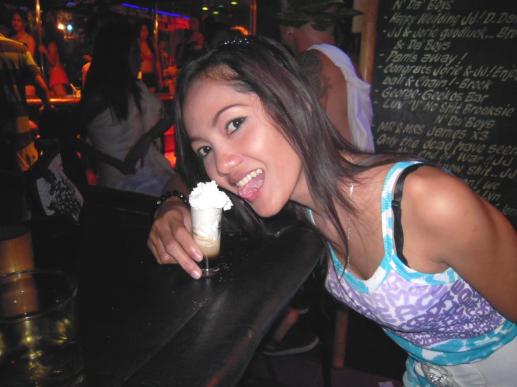 I recall a time when my steady girl came through the door with a knife held high. I grabbed her arm holding the knife and with my other hand grabbed her by the waist and flipped her over me onto the bed I was sitting on. She may have been small but she was strong! I managed to pry the knife from her hand and put her outside the door locking it behind her.

The following morning there was a knock at the door. I got up and answered it. It was my steady girl. She seemed fine. She asked me for some money saying she was hungry. I gave her some money and told her to bring me back something to eat also. She turned and left.

She did not return in the few minutes that I was expecting. After about 45 minutes I went outside my door and peered down into the courtyard. I was on the second-floor balcony. Shortly she came stumbling across the yard. This was abnormal since she did not drink. She came upstairs where I was. I asked her what was wrong. She replied that she had taken the money and bought Valiums.

I knew Valiums were real cheap and had no idea how many she might have taken. I spied a bottle of cooking oil on the floor. I picked it up, removed the cap and handed it to her instructing her to take a drink. She began chugging the bottle down. I attempted to grab the bottle from her spilling oil all over her and me both. She let out a yell, “I kill myself!” With that, she took a leap over the railing. I grabbed for her, but with the oil on her and my hands, she just slid right through. Finally, I managed to clamp my fingers around her ankles and stopped her fall. There she was dangling upside down over the rails.

My buddy had been there the night before and I did not know whether he had gone back to the ship or stayed the night, but I began calling for him at the top of my lungs. My girl was kicking and hollering, “I kill myself!”

It seemed like an eternity, but within moments my buddy appeared in the courtyard in nothing but his underwear. He looked up and exclaimed, “Damn, Bill. You’re gonna kill her!” “Get the hell up here fast. I can’t hold her much longer,” I yelled back. My buddy came running at full speed. We managed to haul my girl back across the rail. I carried her into the room and laid her on the bed and held her down as she cried and yelled.

After a while, she fell asleep and when she awoke a few hours later she was back to her old self.