REMEMBERING ONE OF OUR UNSUNG HEROES!

In the segregated US Navy of World War II, Black-American men like StM2c Burke all had general duties as Steward’s Mates or Officers Cooks when serving aboard ship.

They were part of the Supply Division, reporting through the ship’s Supply Officer. Their job was to attend to the officer’s quarters and in the wardroom.

StM2c Burke was a big, strong man with a lot of heart. His battle station was below deck, as part of the number 5 5-inch gun handling room team.

StM2c Burke hoisted the heavy projectiles from one of the ship’s 5-inch magazines to those in the handling room.

Many of StM2c shipmates believed he had all the physical attributes to make him the perfect Sailor for the job. In addition, he had the mental, emotional and moral strength to handle the situations they got into without breaking down when the ship needed him the most.

He never complained about the hard work…he worked all alone and he never asked to be relieved even for a short period of time.

USS Bush was operating as a radar picket ship off Okinawa on 6 April 1945 and had splashed at least one plane when she was hit and subsequently sunk by three Japanese kamikazes.

At 1515, the first plane hit at the deck level on the starboard side between number one and two stacks causing its bomb or torpedo to explode in the forward engine room.

Although damage was sustained the ship was not believed to be in severe danger and tugs were requested.

The USS Colhoun was closing in to assist when she was hit by a suicide plane and was so severely damaged that she had to be sunk by another Navy ship.

At 1725, a second kamikaze crashed into the port side of the USS Bush’s main deck between the stacks, starting a large fire and nearly severing the ship.

When his team in the handling room were ordered to come topside, StM2c Burke LPO, SKD2c Aguilar had a hard time convincing him that the order meant him also, he did not want to leave his post.

Once topside, former Assistant Gunnery Officer Ltjg Lubin remembering seeing StM2c Burke go down into the afire engine spaces at least 3 or 4 times to bring up one burned snipe each time.

The Ltjg Lubin noticed that Stm2c Burke’s feet were bleeding and wasn’t wearing any shoes. Being as big as he was, and the deck hatches down to engine spaces as small as they were, the Ltjg Lubin didn’t know how he managed to get through the hatches.

At 1745, a third Kamikaze crashed into the port side just above the main deck. Some of the ship’s ammunition caught fire and began to explode.

Although it was believed that she would break amidships, it was thought that both halves would be salvageable. However, an unusually heavy swell rocked the ship, and the USS Bush began to cave in amidships.

Other swells followed, and the ship was abandoned by her 227 survivors including StM2c Burke. just before she folded and sank. 87 of her crew were lost.

The Commanding Officer, Commander Westholm of the USS Bush, recommended that StM2c Burke receive the Navy and Marine Corps Medal.

The medal was awarded for lifesaving heroism at great risk to one’s own life.

In Commander Westholm’s letter of recommendation, he observed the following regarding StM2c Burke’s actions:

“BURKE’s battle station was in the lower magazine of 5″ gun #5. When his gun became inoperative he came topside and aided in the care and moving of the wounded. He did this in the face of the repeated air attacks on the ship. When forced to abandon ship he remained calm and was a source of constant encouragement to his shipmates. For a period of five hours in the water and on a raft, he supported two men unable to swim and who had lost their strength and one of which was without a life jacket, thus saving their lives. When alongside the rescue vessel he assisted in getting those who did not possess their strength aboard.”

In addition to the medal and citation, Petty Officer Burke was advanced to Steward’s Mate 1st Class “for meritorious performance of duty while in action against the enemy.”

StM1c Burker survived the war but what happened to him after his Navy career is unknown. 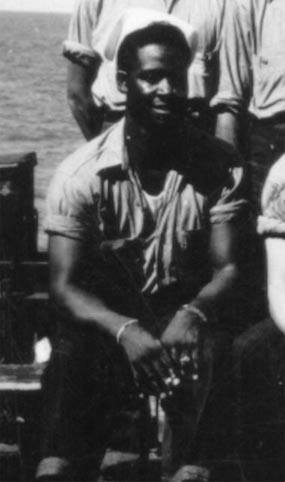