Somebody asked for stories… This happened in the summer of 1967

Now everybody knows that all war stories are obligated to start with “This Ain’t No S**t”…….

But, this one really is the truth. Back in the late summer of 1967 (Statute of limitations is well past…. I hope) I was a helicopter pilot for a Cav. unit in South Vietnam. It was a few weeks before I qualified as command pilot in our unit flying the UH1-D Huey. About 8 or 10 miles south of our base was a watermelon patch.

Every time we flew past, my command pilot “Igor” would always say we needed to get ourselves a watermelon.

One day, about half of the melons in the field were gone. They were being harvested. That was good enough for Igor. We swooped down on our way back from a mission and landed near the biggest melon in the patch. Our crew chief grabbed the melon and we were off. (Nothing like an armed helicopter for an escape vehicle) Back at base camp we eagerly plugged the melon…. It was still white inside…. (We hadn’t considered that they were picked green so they would ripen up in shipment…. Duh!!) That brought up the problem of what to do with the evidence…. We were sure the “Old Man” would enlarge our afterburner vent with a glowing poker if he found out about our larceny. Well, the solution was obvious. There was a corner of a field just off of Highway 5 that always produced some enemy fire. Although this was in a free fire zone, our usual route through the area bypassed it by a reasonable distance. Command had pretty much decided that one VC shooting at helicopters that were at least a half mile out of range wasn’t much of a threat and therefore there was no need to mount an attack on him as long as he stayed where he was.

That became “The Prime Target”…..

Design of our improvised weapon was discussed for some time (probably 3-4 minutes). We finally came up with the idea of stuffing the purloined watermelon with grenades to “Wipe Out” the lone VC at the corner of the field. We cut three holes in the watermelon, putting a Frag grenade in the center, and a WP on either side it. When the time came to drop our secret weapon, the crew chief would pull the grenade pins, and throw out the “Bomb”. The grenade handles would be held in place until the watermelon burst on impact…. In theory anyway.

That afternoon, we were sent on a recon mission. (I think Igor volunteered for it, but don’t remember). On the way back, we drifted over to the target area. (Back in those days we flew at 1500 Ft AGL because 30 cal tracers would burn out way before they got to our altitude, making hits on a helicopter with small arms an iffy prospect at best.) At 1500 Ft, Igor started our bomb run. The order was given to “Arm The Weapon”….. The pins were pulled…. Naturally, all of the communications on the intercom would have made a B-17 crew proud. As we approached the target the Bombardier (Me) located the stream of tracers and advised the command pilot of the precise (?) location of the source. Igor made a slight course correction, and as we passed over the offending jungle, I hollered “Bombs Away”. The crew chief threw out the watermelon and we started a tight turn so Igor could see the results….. Yep, we hit the jungle…. Not too close to the VC, but we did hit the jungle. A cloud of white smoke rose from the trees showing that our watermelon had shattered as planned when it hit the ground releasing the grenades. The tracers stopped. I doubt that our VC target had ever been shot at before. Unsure of our results, we returned to base. The next day, Igor took us back to the target area….. You guessed it, a line of tracers arced up out of the usual place in the corner of the field. We were our usual 1/2 mile away and safe. Oh well, It was an unusual adventure anyway…. The war went on. And “That Ain’t No S**t” 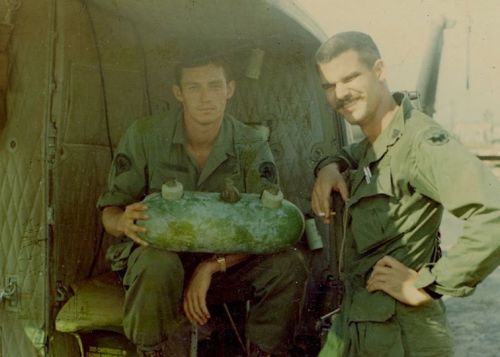