She moved alongside the USS Ajax AR-6 for last-minute engine repairs on 13 April.

A sign of the troubles to come were two small fires that broke out that day, one in an air conditioning compressor and another in an ice machine motor.

Despite high winds and heavy seas, the USS Barbour County conducted two days of difficult beaching and bow ramp exercises on the strand.

Late in the afternoon on 25 April 1984, the USS Barbour County began her last planned beaching operation.

Unfortunately, while trying to retract, the ship swung to starboard, jammed her rudders in the sand and, by 1840, she was fully broached in the surf.

Damage control parties ballasted the ship down to reduce wave damage for the night.

To add insult to injury, while moored at San Diego, the USS Barbour County suffered a major fire in the bosun’s locker on 2 June 1984.

Following a series of temporary repairs and inspections, the USS Barbour County was towed to San Pedro on 16 October to commence a major yard period at the Todd Pacific Shipyard.

The tank landing ship began sea trials on 4 June 1985 and, after successful completion moved to San Diego on the 22 June.

Numerous months of refresher training were required to get the ship back into shape, however, and these exercises were not complete until early November 1985 when she finished her last week of amphibious landing operations. 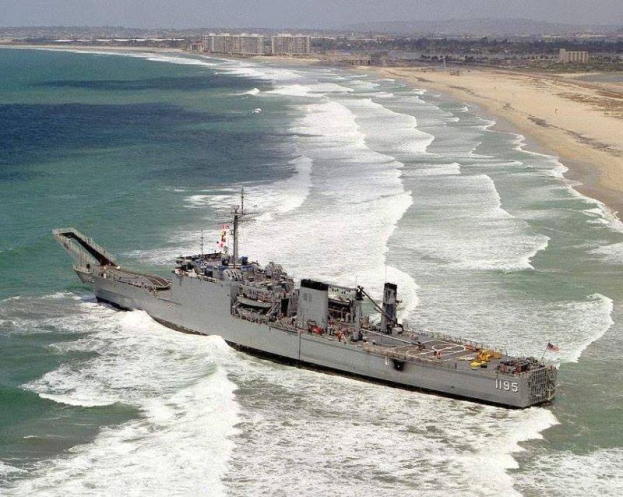