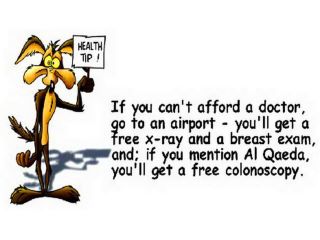 As a person reaches into the fifth decade of life there comes a hurdle that we all are faced with.  The doctors have prescribed it until it has taken on the mantra of a rite of passage to older age.  I am talking about the dreaded colonoscopy.

It usually begins when your doctor asks if you have ever had the procedure done.  The doctor’s next step is to convince you that your health and possibly your very life depends upon another doctor shoving a flashlight and camera up your ass after inflating your guts like a balloon.  Panicked, I was ready to not only say no, but fuck no, until the doctor explains that they will sedate me and I will sleep through the whole procedure.  Relieved, I readily agree, figuring it will probably take a couple of months to get an appointment.  That will give me some time to talk with all the other old farts and get the low down on medical ass invasions.

As luck would have it, as I am preparing to leave, the doctor’s receptionist tells me that she called in my referral to the Colonoscopy section.  I am indeed fortunate, they have a cancellation Friday and I am already scheduled for the first thing that morning and must stop by for a pre-colonoscopy brief.  She tells me the clinic is just one level up and I can stop by on my way out.

I reluctantly wander into Colonoscopy (I am thinking so this is where doctors manage the health and wellbeing of assholes).  The nurse gives me a paper to fill out. I am sure you have seen similar ones.  They ask the same damn questions at every clinic in this freakin’ hospital every time you visit.  They have spent millions on computerizing medical records and still no one has this simple information at hand.  They ask you to list the medications and supplements that you are taking.  I suspect that no one reads these. I have been writing “Horseshit Capsules 200mg” under supplements for two years and no one has ever questioned me about it.

The nurse gives me a Digital Video Disk that explains the procedure. It turns out to be a cartoon about guts and an asshole.  She tells me that I may keep it.  She gave me a bottle of laxative and says drink this entire bottle, twenty-four hours before the scheduled event.  Next she gives me an empty gallon jug, no wait, there is about a cup of powder in it.  She instructs me to fill the jug with water and refrigerate it.   She recommends improving the flavor with Kool Ade or Crystal Light.  Eighteen hours before the exam, I was to drink half the jug as quickly as possible.  I wanted to ask if I could mix it with beer.  I would have a better chance of drinking a half gallon of beer quickly. She didn’t seem the type who could see the humor in that, so I kept my mouth shut.  Then twelve hours before the procedure I was supposed to empty the Jug.  You guessed it, as soon as possible.  I still think beer would be easier.  She also tells me not to eat anything for at least twenty-four hours before the exam.

Since I am scheduled for eight Friday morning, I eat breakfast at seven Thursday, figuring it will be at least a day before I can eat again.  At eight, I shake that bottle up and gulp the nasty crap down.  They said don’t eat.  Didn’t say anything about coffee. My gallon jug of water, powder, and lemonade flavor Crystal Light had been in the reefer for over a day.  I would have to drink half of it at two in the afternoon and the remainder at eight this evening.

I was reclined in my chair dozing and listening to a talk show on the radio.  Suddenly, I was hit with an excruciating pain in my lower regions.  My wife almost fainted when I jumped bolt upright, tearing at my belt as I ran for the toilet.  The only thing I can say is “Holy SHIT!”  I thought it would never stop.

My grandmother’s punishment for what she termed “little boys full of meanness” was a “good working out”, by which she meant a dosing with an elixir called Syrup of Black Draught or the dreaded Castor Oil.  My grandmother believed that a periodic purging made little boys much better behaved.  You know, she was right.  After a dosing of her laxatives, I was too weak to get into any mischief.   I’m glad that she never got her hands on this stuff.

After I thought I had survived the bottle of laxative it was time to drink a half gallon of the chilled liquid, which I reluctantly did.  At the time I would have bet you there was nothing left in my digestive system.  Boy was I wrong.  I never lost eye contact with the toilet for the next six hours when, you guessed it, time to drink the next half-gallon.  I told you it was refrigerated.  It was still ice cold when I flushed it away.  I spent the next twelve hours within arm’s reach of that toilet bowl.  I was hoping the stock of toilet paper held out through the night.  I know they had to call in extra staff for the third shift at the waste water treatment plant.

Finally, morning came and time to leave for the Medical Center.  My wife came with me to drive me home because I would be under the influence of drugs, otherwise they wouldn’t release me for twelve hours.  I carried extra underwear and shorts.  I knew I was going to shit myself during the seven-mile drive to the hospital.  Fortunately, we made it to the first toilet inside the hospital entrance without a mishap.

Arriving at the Colonoscopy Clinic, I was handed a robe, a pair of paper slippers and told to go into a cubicle and get undressed.  There was a room with a TV where my wife could wait. I did as I was instructed and reported back to the desk.  I was directed into a curtained off area with bright lighting, a hospital type bed, and some tubing and other incomprehensible instruments.  I was instructed to climb onto the table.  The nurse wrapped a rubber band around my arm and put a blank IV lash-up into the inside of my left elbow.  The doctor come in and introduces himself.  He tells me to position myself on my left side.  He said we put the IV in to administer the sedative and in case I tear the colon and we have to take you up to surgery. “Surgery,” alarms bells were going off in my mind when the nurse said, “Now you will get a head rush from this,” and everything went black.

The next thing I remember is waking up with an almost painful need to fart.  But after my experiences during the past twenty-four hours, I was afraid.  The recovery room nurse told me, “If you feel the need to pass gas, go ahead, it is just the air used to distend your colon.”

From the sounds coming from the other patients in the recovery area, for a moment, I thought I was back in CPO Berthing on that old DD I served in during the end of the Viet Nam War.  I thought Oh, well and cut the absolutely most satisfying fart I have ever experienced.

The nurse eventually told me I could get up and get dressed.  I did so thinking that maybe the preparation was worth the drugs. Oh! No! No fucking way.  There is no way anything could be worth twenty-four hours of trying to shit my tonsils.

I was told to wait in the room with my wife and the doctor would see me with the results soon.  It was twelve noon, my last meal was twenty-nine hours ago, there was nothing solid between my tonsils and my rectum.  I felt as if I had missed breakfast, dinner, supper and midrats.  I was as weak as a kitten. The TV was on the Food Network.  I don’t eat chicken but if someone had offered me fried buzzard that looked as good as what Bobby Flay was displaying, I may have had a piece or two.  I was so hungry.

The doctor finally called me in and started showing me photos of my innards.  He complemented me on the cleansing job.  As if I had had a choice! He told me that there were no polyps and I wouldn’t have to repeat the procedure for ten years.

I had her stop at McDonalds on the way home.  I bought and ate two Big Mac meals before we got home.

My next colonoscopy is only a year away.  Just thinking about it takes some of the happiness out of a living another year.