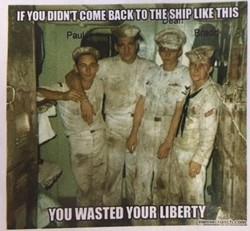 The photograph above was posted by Shipmate John Summerer and the following remarks are his:

I first posted this picture about 26 hours ago! Little did I know the emotions I was going to have, and go through since that time. I was just posting it to some friends and families as a fun thing to show from my wonderful time that I served in the US Navy. I also shared it to The Tonkin Gulf Yacht Club, and AAMOOSR. Since that time, I have received 597 LIKES, and 221 COMMENTS!

I had no idea that I was going to touch so many emotions and thoughts with so many wonderful people from all over, and from so many in the City of Olongapo, PI. I am not ashamed to say that I went through many tissues in these past 26 hours, reading and discussing many topics with so many people.

One that sticks out to me, and because of the amount of comments I apologize to the Navy Vet that said ” you cannot talk to people about it unless they were there! And that there were no words to express to people who were not there”

The emotion that I felt from him and so many more, knowing that I touched his feeling that he said he was not able to talk about, because you had to be there to know!!! I feel that his emotions that were inside him came out somewhat with my post that was just meant to be funny for family and friends as I said before.

The replies that I made to many people today were so emotional at times, but they were a discussion about the changes that the Navy has gone through, and The Old Navy like this pic is GONE!!! Some of the “younger” guys that asked me about that being our uniform of the day? I explained that in the 60’s we were not allow civies on board to go on liberty. So when you were out at sea for anywhere from 30 to 60 days. when you went on “Liberty” you were very “Liberal” with your time. LOL and you played hard, like you worked hard while at sea. And when I went in country for a year on USS Jennings County LST 846, it was only twice that we left Viet Nam for R&R and repairs.

The Navy started to really change as one person said today in the mid “70’s. This pic is about what the OLD NAVY was like for so many of us!!! Most of us were very young. I for one got out after serving 3 years 3 months and 28 days active duty in mid February 1970, I turned 21 August 5th 1970. And here is a short funny story to go with that. My mother took me to the bar I had been “visiting” since I got home and told my friend Ron the bartender that she wanted to buy me my first legal drink!!! He looked at me and wanted to see my drivers license and well I can’t tell you what he called me and said to me then, but we all had a great time that day! LOL!

To close out, I want to thank everyone that liked and commented on my post, I had know idea that I would touch so many peoples lives with it. But I also want to say that the emotions I felt for those who liked it so much, and were able to talk on here and with me, have made me feel that I have made hundreds of friend in one short period of time.

This is the original post of this photo in a snipe group from Paul Nelson Jr.