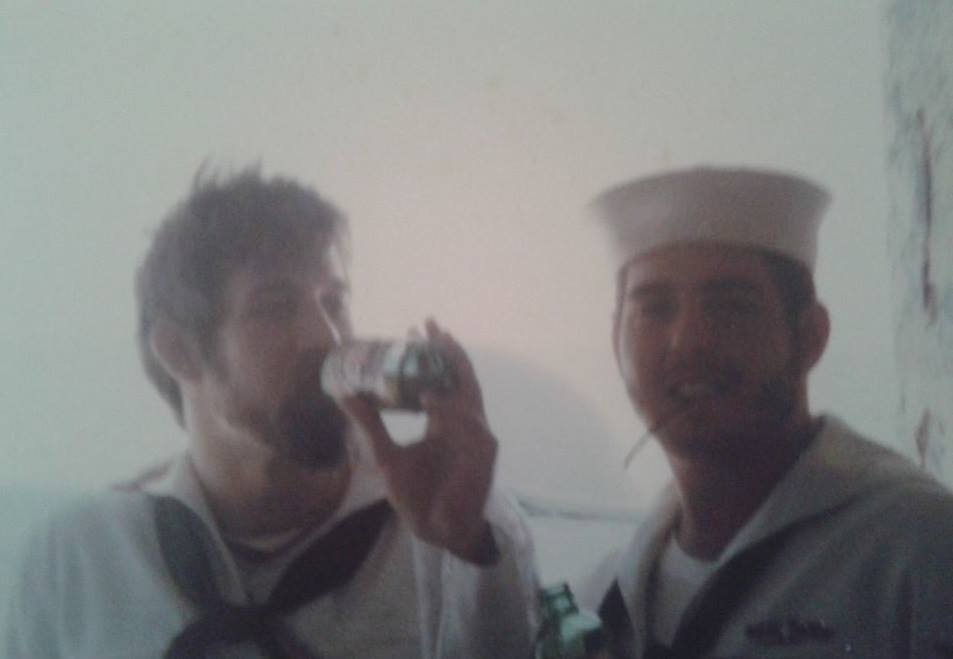 As told by Mark Bowen

The photo featured above was taken during this liberty!

It was early in the year 1982.  The ship arrived in Mogadishu, Somalia after one hundred eight days at sea.  The beach area bars seemed to be the best liberty to available.  The required liberty uniform was whites.  The cost for beer was approximately $3US. But we didn’t care.  After all, we were sailors and one hundred eight days is a hell of a long dry spell.  Several hookers were hanging around the bars.  Some Hash was being smoked along with the beer.

Once we reached the beach bars and slaked our immediate thirst, my LPO and I rented a couple of cuties early in the day.  They took us to a park area in the desert.  I guess you could call it an oasis.  There were trees, shrubs with pits dug between them. The bottom of each was covered with a woven mat.  In the beginning, it was a scary experience, especially during the ride since we weren’t sure where they were taking us.  But it all turned out okay.  My LPO and I had adjoining pits.  It was fun, and hilarious see a naked girl hanging from a tree and some of the other shit we did during the hours we were at the Mogadishu Fuck Park.

By the time we returned to the bar, everyone had returned to the ship.  It was 1800.  We decided to have a couple of beers and go directly to the Ambassadors.  We took some beer and the girls along with us.

The taxi we hired pulled into the Ambassador’s compound and, as fate would have it, stopped directly in front of our CO and the Ambassador.  We figured the turd had hit the proverbial fan.  We were not supposed to use the local taxis, and since the girls were wearing our white hats, we were wearing their scarves.  We could see the Skipper clouding up as we stepped from the taxi just as the Ambassador says, “Captain, I am happy to see that some of your crew are interacting with the locals.”

We traded the scarves for our hats and sent the girls back to the bar in the taxi.  Nothing was ever said about our using the taxis and uniform infractions.  “Liberty Larry” Blumburg was a pretty cool skipper.

As the party wrapped up, we took cases of the beer the ship had provided for the party back aboard the bus and continued the party on the pier until the wee hours of the morning.  Needless to say, there was no beer left.