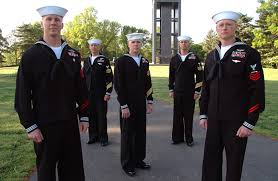 The US Navy “Crackerjack” uniform is a historic tradition unlike any other military uniform. For the most part it dates to the early 19th century, and even the peacoat is of a style which would have been familiar during the War of 1812. The broad collar on your jumper is there to protect it from the tar you use to keep your fashionable pony tail in place, and you can easily roll up your bell bottoms to scrub the decks. If the ship heels over too far in a high wind and you fall overboard, you can easily remove those bell bottom trousers, knot the legs, and have yourself a floatation device.

And if you want a perfect and comfortable fit with your bellbottoms, the manufacturer in his foresight has added a lace-up, called a gusset, at the back of the trousers for just such a reason.
Being a sailor, you have already mastered undoing those 13 buttons on your ‘broadfall’, which is the name of that flap covering your crotch, so you have no problem removing those trousers in an emergency . . . or any other opportune moment. The 13 buttons? They’re there because the earlier 7- button style was inadequate. They have nothing to do with the original colonies . . . I mean, who would celebrate the birth of our nation from THAT angle?
If you have put too much tar on your pony tail, you can use the black neckerchief to wipe some of it off, after all, that’s what it’s there for. Having a shipmate help you out of your tailored jumper, or asking him to hold your jumper’s collar down so you can don your peacoat, all promote good will aboard ship, whether it be a 24-gun man o’ war, or an Aegis destroyer.
The ‘dixie cup’ cap is unique to the US Navy, and is of the most durable and serviceable material available. The ‘white hat’ has been used since the late 19th century. And everyone knows at a glance exactly who those men in blue are, and a sailor from the 21st century would be recognized in the 1800s as a shipmate, and a 19th century swabbie could do the same today.
I believe that our naval traditions must be preserved, and that the “crackerjack” uniform should stay for at least another century. It’s a tradition that instills pride in an individual, and a uniform that had introduced a young nation and her flag to the world. An American sailor’s swagger is due in large part to his pride in his uniform.
And it’s a uniform that says, “I AM AN AMERICAN SAILOR, AND DAMNED PROUD OF IT!”

One thought on “The Navy Uniform”