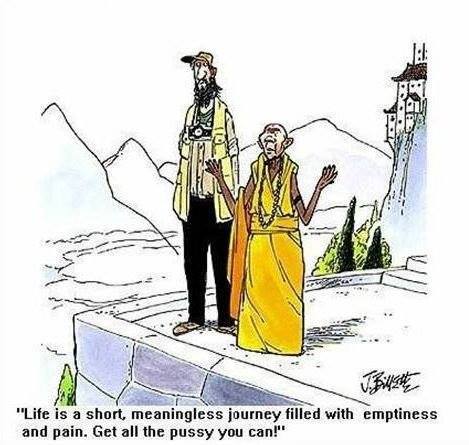 I went to the old folk’s home while on leave, hell, I qualify to be there now. An old Vet I was visiting said he was skeptical at first, but his way of thinking was coming around. I asked what that was? Chasing pussy, the old Vet ventured. I was rolling with laughter. The image was so damned funny. My war stories couldn’t compete, his stories were FUN.  He gives a wink and nod that every Politician knows, like entering the freeway in a sports car he rolls his chair out into the hallway. Come on he says, coffee time.

Another wink and a nod we were there. Sure nuff, three Q-tips were smiling and trying to out flirt each other. Puffing purple hair and the clacking of false teeth making sure there was no cottage cheese still on the graceful smiles. The old Boy perked right up. In his glory. We had DECAF until I heard a kitchen worker saying re-caff the decaf… sure nuff one pot poured into another.

Virg, called the ladies by pet names and no preteen was more mindful of wiping eyebrows, puffing up breasts that were near belly buttons. It was interesting to see nature overcome by an ingenious way to tit perk. Virg on a steady roll of his perfected wink and a nod. Cakes, cookies, and a special invitation to Virg to remember she had fudge in her room and to come by later. Damn, she even did the wink n nod routine. I was curious if that was covered during indoc or bingo instructions.

I sensed rather than be told the action might be more lively if I want there. Virg pushed himself to his room. He was beaming. Said, “What the hell did I tell you?”  I replied, “Virg you are a man among men.” Virg laughed his small cackle that I remembered all my life. He said, “Son, old boy Thompson can’t get it Up! Jennings is an idiot that wouldn’t know what it is if it’s rubbed in his face. I’m the only one here that can still smoke the sheets.” I asked about Mr. TOWER a former teacher. He said, “Hell, Tower thinks he’s in Disneyland he’s so damn dumb.”

Virg told me that the girls tried to outdo each other and generally accepted he would do his Harem as he could work it. He said he had to address the women’s jealously only once because Ms. BECRAFT showed her ass trying to claim him as her own.

I had brought Virg books, magazines, and drawing materials as his passions were strong in that area. He had to lose the drawing kits as he had been busted doing nude drawings in the moonlight in his room.

Never had I been so raised up myself by going to see a friend. Thinking he had a tough life. I finally knew that perception is reality only if your reality is perception… Sadly he passed away while I was on a six-year tour in the ORIENT. The inspiration Virg gave just by being positive!

Virg, he confirmed one belief, you never get too old to chase pussy! Yes!  Some will raise their eyebrows, but Virg wasn’t talking about anything other than what his BASE thought the process was.

Virg went to church every time it opened.

I’m not qualified to think he will go to anywhere but Heaven. He sure spread some good will. Keep winking Virg.

This is Cotton saying “Hey”… BOSN