Fifty two years ago a fire broke out onboard the aircraft carrier USS Forrestal. An electrical anomaly had caused the discharge of a Zuni rocket on the flight deck, triggering a chain-reaction of explosions that killed 134 sailors and injured 161. At the time, Forrestal was engaged in combat operations in the Gulf of Tonkin, during the Vietnam War. The ship survived, but with damage exceeding US$72 million, not including the damage to aircraft the future United States Senator John McCain and future four-star admiral and US Pacific Fleet Commander Ronald J. Zlatoper were among the survivors.

At about 10:50 (local time) on 29 July, while preparing for the second strike of the day, an unguided 5.0 in (127.0 mm) Mk-32 “Zuni” rocket, one of four contained in an LAU-10 underwing rocket pod mounted on an F-4B Phantom II (believed to be aircraft No. 110 from VF-11), accidentally fired due to an electrical power surge during the switch from external to internal power. The surge, and a missing rocket safety pin, which would have prevented the fail surge, as well as a decision to plug in the “pigtail” system early to increase the number of takeoffs from the carrier, allowed the rocket to launch.

A drawing of the stern of Forrestal showing the spotting of aircraft at the time. Likely source of the Zuni was F-4 No. 110. White’s and McCain’s aircraft (A-4s No. 405 and 416, respectively) are in the right-hand circle.

The rocket flew across the flight deck, striking a wing-mounted external fuel tank on an A-4E Skyhawk awaiting launch, aircraft No. 405 from VA-46, piloted by Lieutenant Commander Fred D. White.. The Zuni rocket’s warhead safety mechanism prevented it from detonating, but the impact tore the tank off the wing and ignited the resulting spray of escaping JP-5 fuel, causing an instantaneous conflagration. Within seconds, other external fuel tanks on White’s aircraft overheated and ruptured, releasing more jet fuel to feed the flames, which began spreading along the flight deck.

The impact of the rocket had also dislodged two of the 1000-lb AN-M65 bombs, which fell to the deck, and lay in the pool of burning fuel between White’s aircraft and that of Lieutenant Commander John McCain. Damage Control Team No. 8 swung into action immediately, and Chief Gerald Farrier, recognizing the risk, and without the benefit of protective clothing, immediately smothered the bombs with a PKP fire extinguisher in an effort to knock down the fuel fire long enough to allow the pilots to escape. The pilots, still strapped into their aircraft, were immediately aware that a disaster was unfolding, but only some were able to escape in time. McCain, pilot of A-4 Skyhawk side No. 416, next to White’s, was among the first to notice the flames, and escaped by scrambling down the nose of his A-4 and jumping off the refueling probe shortly before the explosions began.

Damage Control Team No. 8 had been assured of a 10-minute window in which to extinguish the fire and prevent the bombs from detonating, but the Composition B bombs proved to be just as unstable as the ordnance crews had initially feared; after only slightly more than one minute, despite Chief Farrier’s constant efforts to cool the bombs, the casing of one suddenly split open and began to glow a bright red. The Chief, recognizing that a lethal cook-off was imminent, shouted for his team to withdraw, but the bomb detonated seconds later — one minute and 36 seconds after the start of the fire.

The detonation destroyed White’s and McCain’s aircraft, along with their remaining fuel and ordnance, blew a crater in the armored flight deck, and sprayed the deck and crew with bomb fragments and burning fuel. Damage Control Team No. 8 took the brunt of the initial blast; Chief Farrier and all but three of his men were killed instantly; the survivors were critically injured. Lieutenant Commander White had managed to escape his burning aircraft, but was unable to get far enough away in time; White was killed along with the firefighters in the first bomb explosion. In the tightly packed formation on the deck, the two nearest A-4s to White’s and McCain’s (both fully fueled and bomb-laden) were heavily damaged and began to burn, causing the fire to spread and more bombs to quickly cook-off.

Lieutenant Commander Herbert A. Hope of VA-46 (and operations officer of CVW-17) was far enough away to survive the first explosion and managed to escape by jumping out of the cockpit of his Skyhawk and rolling off the flight deck and into the starboard man-overboard net. Making his way down below to the hangar deck, he took command of a firefighting team. “The port quarter of the flight deck where I was”, he recalled, “is no longer there.” Two other pilots (Lieutenant Dennis M. Barton and Lieutenant Commander Gerry L. Stark) were also killed by explosions during this period, while the rest were able to escape their aircraft and get below deck.

Nine bomb explosions eventually occurred on the flight deck, eight caused by the AN-M65 Composition B bombs cooking off under the heat of the fuel fires, and the ninth occurring as a sympathetic detonation between an AN-M65 and a newer 500 lb M117 H6 bomb that it was lying next to on the deck. The other Composition H6-based bombs performed as designed and either burned on the deck or were jettisoned but did not detonate under the heat of the fires.

The explosions (several of which were estimated as up to 50% more powerful than a standard 1000 lb bomb, due to the unintentionally-enhanced power of the badly degraded Composition B) tore large holes in the flight deck, causing burning jet fuel to drain into the interior of the ship, including the living quarters directly underneath the flight deck, and the below-decks aircraft hangar.

Sailors and Marines controlled the flight deck fires by 12:15, and continued to clear smoke and to cool hot steel on the 02 and 03 levels, until all fires were under control by 13:42. Assistance was provided by one of the ship’s accompanying destroyers, USS Rupertus, which maneuvered around Forrestal, getting as close as 20 feet from the burning carrier, for 90 minutes using her own onboard fire hoses directed at the flight deck and hangar deck on the starboard side, and the port-side aft 5-in. mount. The commanding officer of the Rupertus, Commander Edwin Burke, received praise for what Rear Admiral Harvey P. Lanham, aboard Forrestal as the Task Group commander, called an “act of magnificent seamanship” The fire was not declared defeated until 04:00 the next morning, due to additional flare-ups.

Throughout the day, the ship’s medical staff worked in dangerous conditions to assist their comrades. HM2 Paul Streetman, one of 38 corpsmen assigned to the Forrestal, spent over 11 hours on the mangled flight deck tending to his shipmates. A large number of casualties quickly overwhelmed the ship’s medical teams, and the Forrestal was escorted by USS Henry W. Tucker to rendezvous with hospital ship USS Repose at 20:54, allowing the crew to begin transferring the dead and wounded at 22:53. 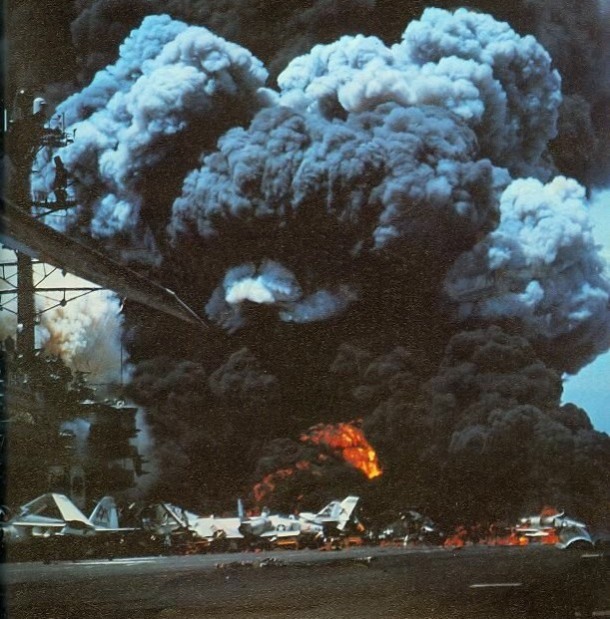 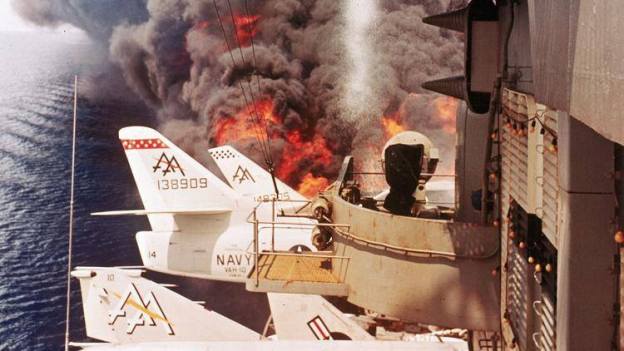 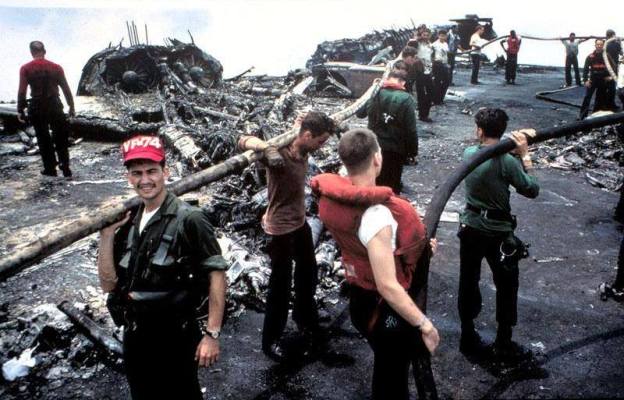 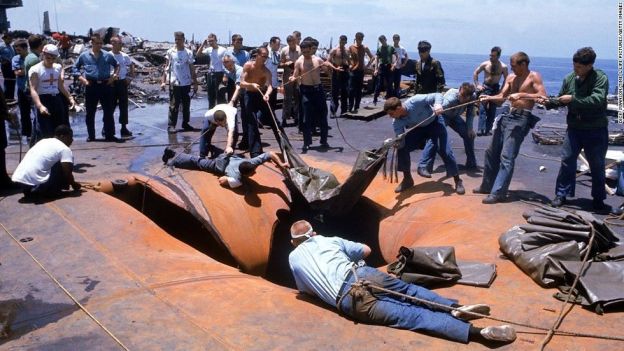 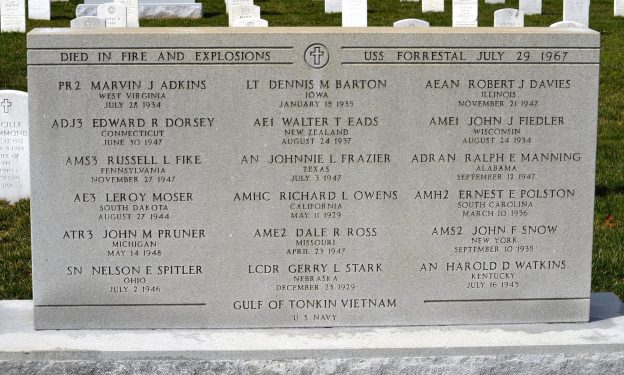 I wish for you fair winds and following seas, deep green water under your bow, your main rifles trained in the posture of peace and a gentle breeze at your stern.