This is the way the incident was reported by the Norfolk media:

The Stump, which was conducting routine operations in the area when it received the distress call from the 72-foot Sara Ann at 8:30 a.m., was assisted by two Coast Guard aircraft from Elizabeth City, N.C., that circled overhead to mark the boat’s position, the Navy said.

When the Stump found the Sara Ann about 1 p.m., the fishing boat was foundering in 8- to 10-foot seas. The destroyer put a rigid hull inflatable boat overboard, and three Stump crew members steered over to the boat, carrying an extra pump. The Coast Guard aircraft had already lowered four pumps; altogether, the extra pumps failed to control the flooding, the Coast Guard said.

After making a damage assessment, the group decided the boat wasn’t salvageable. The New Jersey-based crew, soaked and cold after hours of pounding by high waves, was brought aboard the Stump in two shifts, the Navy said.

The crewmen were “all in pretty good shape,” according to an officer on the Stump. They were given clothing, food and a chance to call their families, the Navy said.

In March 1998 the Sara Ann (a fishing trawler) was operating off the Virginia Capes when the seas became too much and she started taking on water. Stump, while conducting routine operations on 17 April 1998, was informed by the United States Coast Guard Station Portsmouth that the Sara Ann was in distress. Stump subsequently rescued four civilians about 65 nautical miles off Cape Hatteras, North Carolina. Stump provided safe passage back to Norfolk, Virginia.

This is the rest of the story as told by Keith Immerzeel, a snipe who was there:

We had a lot of strange incidents on my ship I will never forget. After speaking on another post on a time we saw a helo go down during vertrep and losing some members of the helo crew it made me think of the time we were able to help out a group of civilians. I will never forget this as it was a “family and friends” cruise day where people could bring relatives or whoever they wanted on board and we went out and puttered around the outskirts of Norfolk for awhile while everyone basically got to tour the ship, check out many of the places while it was in operations. We even had more visitors to the engine room than I expected we would. I figured everyone would be up on the bridge taking a turn at steering the ship.

We received a call for help that morning from the Coast Guard regarding a civilian vessel off the coast of North Carolina in distress. I distinctly remember it being a Friday and at first when some of the crew realized we had been rerouted they were a little bummed because we were supposed to be out a few hours and then back in port and unless you had the duty you would be on liberty shortly after noon. And if you didn’t have the duty over the weekend it was going to be nice having a long weekend.

Apparently, we were the closest ship, so with all these civilians onboard, we hauled ass at flank speed for the rest of the morning into the early afternoon to get to the vessel. When we got there and secured the crew of the sinking vessel on board it was determined the vessel could not be saved as it was taking on too much water. So then things got even more interesting. I’m not an expert on maritime law or rules but apparently, we were not allowed to leave until the vessel was completely submerged and gone. I don’t know the reason behind this. But rather than waiting, even more, time in the area since we had an entire ship full of civilians plus the four we had gained off the coast of North Carolina, we broke out the 20mm and made her sinking come quickly. The owner of the vessel knew it was a complete loss anyway so he was supportive of us putting it out of its misery.

We didn’t get back to Norfolk until late that night. Normally when you think about anyone who gets delayed by anything they are often upset. This entire group of civilians who were only supposed to be gone a few hours ending up being on board for around 12 hours, ate two meals on board, and got to see her in action going balls to the wall were the happiest people I have ever seen who had an unexpected delay. I will always remember that.

The friends and family absolutely loved it and they got to see more of our daily routine than they had imagined they would. We had people staying down in the engine room for quite awhile as they now had a lot of time to kill and since we had the same amount of time to kill this afforded them the time to be able to ask all the questions that were on their mind and get much more in depth answers rather than having a couple of hours to tour the whole ship. Now they could devote multiple hours to the area that interested them the most.

It was the fastest an engine room watch has ever gone by. 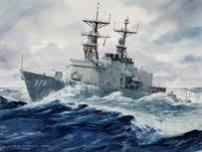