The Commissaryman First and Chief training course listed a primary duty of a Leading Commissaryman as “preparing the weekly Bill of Fare.” In other words, writing the weekly menu. He had several tools to assist in this process. The Navy Ration Law, the Navy Recipe Service (Now the Armed Forces Recipe Service), an up to date listing of food items available, a special form for writing the menu and another form on which to type the menu for the Commanding Officer’s approval. 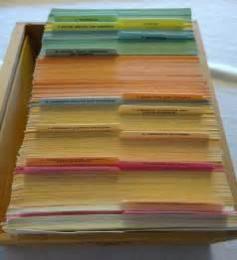 NOTE: Sailors don’t dare say ”pass the Parkay” in mess halls and shipboard galleys. It’s against the law. Despite a trend throughout the military toward more health-conscious eating, the 1937 Navy Ration Law bans all spreads except butter from Navy and Marine Corps dining rooms. The law, kept on the books at the insistence of the butter lobby, was originally written to help ensure that seagoing sailors got enough dairy products in their diet. Over the past few years, Navy officials have tried to get the law changed four times to allow the use of margarine, but Congress has never gone along. Because government surplus butter is used, a switch to private-sector margarine would cost more. This arcane rule does not apply to the other armed services. END NOTE

When I first became a cook, the Chief wrote a new menu each week for the following week. Later the Navy Food Service Office recommended a three-week cycle menu and then a five or six-week menu. I always used a six-week cycle. A cycle menu makes it easier to plan a loadout to the menu rather than plan a menu to whatever you have aboard.

It became inherent that the Commissaryman writing the menu have a rudimentary knowledge of nutrients and nutrition. Since becoming a Chief Commissaryman and later a Mess Management Specialist I have had both a professional and a personal interest in food and nutrition.

Almost every week one can find a news article touting or condemning a food. It is cyclical. One time eggs are bad, then in moderation and later eat as many eggs as you desire. At one time or another, we have been cautioned about red meat, sugar, eggs, bacon, and all sorts of other things we enjoy eating. If we listened to health food advice we would be forced to dine on soybeans, kale, bee pollen, and various kinds of bran. Eating a diet like that would end everyone’s fear of constipation and increase sales of Charmin.

Several years ago, the Coca-Cola company suggested that people drink Coke for breakfast. I became a strong proponent of this philosophy. When you wake up in the Barrio after a night of sipping San Miguel and providing companionship for a lonely LBFM an ice cold Coke or Pepsi just seems to hit the spot. The nutritionists were faking coronaries at this. They might well have suggested one begin the day with Twinkies, Little Debbie, and a Snickers Bar. The nutritionists were aghast that someone might chase down breakfast with a soft drink.

I’ll admit that I am not a specimen of good health, but I don’t think I would be in as good a shape without my Diet Dr. Pepper in the morning. If one can become addicted to soft drinks, then I am addicted to Diet Dr. Pepper. I am usually groggy, sluggish, ill-tempered, slack-eyed, and loopy when I wake up. I start the day with two or three cups of strong black coffee and my e-mail. Shortly afterward I have the first of my daily six-pack of Diet Dr. Pepper. It used to be one or two a day, but since events at the last Asia Sailor’s reunion in Branson, I have given up the beer, whiskey, wine, moonshine, and Sterno. Diet Dr. Pepper is my drink of choice morning, noon, and night.

I once had a Petty Officer in my division who started each day with a warm Pepsi Cola. I am not sure that this practice had anything to do with the fact that he only had one tooth. But Furd is another story that I have told before.

One last thing, one of my best friends is a Texan and lives in Dallas. Texas is considered in the South. Dr. Pepper is a Texas product with deep Southern roots. I must stand against any nutritionist who would try to take my Diet Dr. Pepper away. Give them that and perish the thought, pork belly and grits could be next.

One will often read scare articles on Facebook and other social media damning Aspartame, the artificial sweetener used in most diet drinks. The people who write and pass on these stories attribute every affliction known to man to this ingredient, everything from cancer to hammer toe, erectile dysfunction, and toenail fungus. They succeeded in getting cyclamates banned and saccharin for a while until public sentiment forced Congress to rescind the ban. Ignore these people. They will only be satisfied when we are eating something raw that grows in a swamp.

One thought on “Navy Cooks and Nutritionists”