Another Day in Boot Camp – Not quite.

Dawn had arrived on 20 October, 1976, as I started my fourth week of United States Navy Boot Camp at the Recruit Training Center (RTC), San Diego. This base was directly at the very end of Runway 27 at San Diego’s International airport, Lindbergh Field. I was barely 18 years of age and life was starting!

It was a Wednesday, as I recall, not that this means anything to those in Recruit Training. For thirteen weeks, the day of the week meant literally nothing. We were rousted out of bed in the usual fashion, which was neither harsh nor pleasant. We had about ten minutes to get fully dressed and formed up for the march to the chow hall for the first meal of the day.

Every once in a while you meet or cross paths with someone who is larger than life itself, who can definitely have a very large impact on you, personally. Enter our Boot Camp Company Commander, or CC for short. This guy could, and usually did, make your life most uncomfortable when he wanted or needed to. He was everything and your sole reason for existence for every single day of those thirteen weeks. Enter one Petty Officer First Class Williams. He was a rather short, raspy black man, but those who thought his diminutive size was a sign of weakness were quickly schooled to the contrary. He quickly got our attention….and respect…. on day one. Nothing moved unless it had his specific knowledge and permission. Yet, another interesting aspect is that he had this gravelly voice, as if he had a throat full of rocks when he spoke to you. I have yet to hear anything like it since….. and I retired from a 22-year Navy career some 20 years ago this month….so it has been awhile.

The day unfolded like any other day with drill practice out on the grinder after breakfast. I actually enjoyed our marching and drill immensely. The intricate maneuvers we performed were actually a thing to behold and the sound of 80 boot heels striking the pavement at a single instant is unique and indicative of a well trained marching unit! I can still hear that distinct, gravelly voice barking out commands to this very day……”Your left oblique, MARCH”! The whole purpose of boot camp and drill was to unmold you as an individual and remold you as part of a team. It works quite well! Following drill, we had several classes to attend all over the base and had to march, as a group, to each of those areas.

At long last, the day was winding down and Petty Officer Williams marched us to the chow hall for our final meal of the day. When he had his company securely in line at the chow hall, with all of the other companies (80 young men per), he and the other CC’s would depart and have their dinner with the other CC’s in a different building. They NEVER ate with us or occupied our chow hall……ever. I stood in line for several minutes and finally made it to the Mess line. Fried Chicken with mashed potatoes and gravy was on the menu today and, believe it or not, Navy food was actually quite good. I loaded up my tray with the standard portions along with some milk and wound my way through the tables in search of an open seat. I clanked the metal tray onto the table and…………”PARCELL”! My blood literally ran cold. There was no mistaking that voice. Why was my CC in our chow hall and why was he hollering at me from clear across the mess deck?!? I stood, petrified, until he arrived at my side. He asked “Have you eaten?”, which I immediately found to be rather absurd considering that my steaming tray of food was sitting right there on the table, untouched. I replied no, I hadn’t started yet. He quickly motioned for me to sit and eat. Well what the hell was this all about? I sat and took exactly one bite and told him I was done. As I stood he motioned for me to follow so I fell in step beside him as we walked out to a now setting sun. What could this be all about? At last I found my voice and, though a bit shaken, asked in a very quiet voice, “Sir…..am I in trouble, have I done something wrong”? He then put his arm around my shoulder and quietly said “Son, we need to let the Chaplain talk to you”. My knees just about gave out….I knew this could NOT be good. I would rather have been found guilty of some major infraction. We walked across the Grinder and, with each passing step, the fear of what was about to befall me weighed heavier on my shoulders. After what seemed an eternity, we had arrived at the Chaplain’s Office. In writing this out it seems almost dream-like after the passage of 41 years yet, I remember the sound of each of those steps as though this happened five minutes ago. It was to be the longest walk of my life.

I was ushered into a room where three senior men were standing, awaiting my arrival. The Chaplain motioned me to one of four chairs facing the other three. I sat without problem as my knees had turned to water. The Chaplain and two others sat, then leaned into me and asked, “Son, did you know that your Father was a very sick man?” I stated that I had not lived with him for seven years but that I had spent the summer with him and, no, I knew nothing of the sort. He went on to inform me that at about three o’clock that morning, he had driven himself to the hospital and had died on the table after a series of heart attacks. The rest of that meeting is largely unknown to me. I started shaking uncontrollably and had to be comforted. At last I had collected enough of my senses to walk back to the barracks with my CC who then had me call home. Later that evening he allowed a late night vigil of sorts and the gang passed the hat to collect monies for me to be able to travel. It was an act of kindness and a day which will never escape my memory. 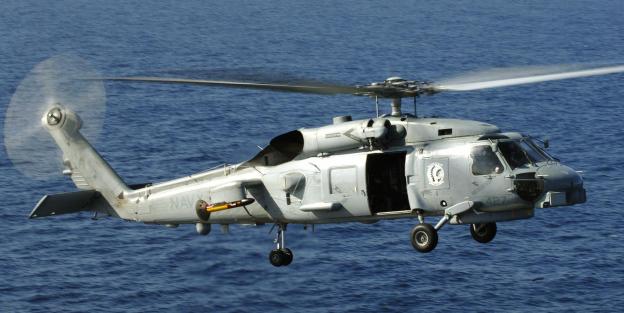 Turn the clock forward more than a decade and it is now April, 1990. In the years that followed, there had been many changes in my Navy life. Most notably, I had put myself through college and Naval Flight Training. I was now a Commissioned Officer and Naval Aviator piloting SH-60B SeaHawk helicopters from the decks of Guided Missile Fast Frigates and Destroyers. I was exactly where I wanted to be! But I sure was a lot busier and a lot less care-free than I had been as an enlisted man. There were so many qualifications to keep current along with the leading / managing of many young Sailors. But, I was having the time of my life nearly 14 years into my career.

One day at the squadron that spring I was on the first deck and needed something topside from one of the spaces on the second deck. As usual, I was dressed in the khaki uniform of a Navy Lieutenant with the brown shoes / gold wings of an aviator and went bustling up the ladder two or three stair-steps at a stride. I opened the door into the building and hustled the short distance to the main passageway where I blasted around the corner, still very much in a hurry and……………”PARCELL”!!

The passage of fourteen years of service crystallized and dissolved in a scant microsecond. I damned near tripped and fell as I screeched to an abrupt stop. I froze, my back to the owner of that voice who had just belted out my name. Now, fully upright, there was absolutely no mistaking the gravel in that voice. It just could… not…. be.

I slowly turned on my heel and, down the passageway in our sister squadron stood a short, raspy black man, now clad in a similar khaki uniform with the salt and pepper hair to go along with his years of service. Master Chief Petty Officer Williams stood before me as the senior enlisted man for HSL-49. Every Command has one Master Chief Petty Officer of the Command who acts as the Executive Officer’s right hand man in direct liaison with all of the enlisted men and women in the command. I slowly walked up to him in pure disbelief. He beamed, shook my hand and just looked at me! Finally, he spoke and said, “Look at you….you have done very well, Son”! It took every last ounce of self-control I could muster to hold it together…….I didn’t have enough! The last time he had seen me I was a fresh-faced 18-year old kid, who knew nothing from nothing, on my way off the base at RTC to a very uncertain future.

One thought on “Another Day in Boot Camp – Not quite”