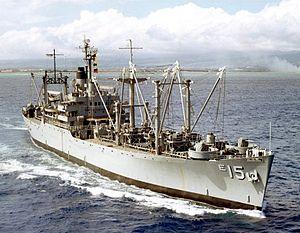 Once in Western North Carolina, my uncle told me he was dead broke. I was just a little boy and had no idea what being dead broke meant.

“It means you ain’t got no money. If a feller come down the road givin’ bonded whiskey away for free…I couldn’t’ afford a swaller!'”

You can’t get any broker than that… That’s bottom of the bucket busted.

At around $96 a month base pay and sea pay, a red-blooded American Seaman can reach ‘dead broke’ status with little effort. Beer at the slop chute and Beer Nuts and Slim Jims for supper regularly could wreck your personal finances rather quickly. The guys you went to school with, flipping burgers for two bucks an hour, never missed out on ten cents a gallon whiskey because all they could find in their pockets was lint.

You learned to innovate. A Seaman learned ‘between paydays survival skills’… It was either innovate or become a self-abusing, tee-totaling berthing space hermit. I don’t recall any of those in Vesuvius.

I remember one weekend when my snipe Fireman running mate and I were shifting pocket lint back and forth when we hatched a great master plan.

We scraped together close to twenty bucks. We hit up the slush fund, some asshole who had gotten himself restricted, and the old Chief Yeoman who was sitting around waiting for somebody to invent Viagra.

We changed the twenty into Pesos at the first money changer outside the gate and were off to find female companionship and beer for the weekend. Subic City and the Barrio were out of bounds in those days, but for a Peso, you could hire a couple of kid lookouts to watch for the Shore Patrol. We poured ourselves back across the Quarterdeck from the last liberty boat Sunday night with pocket lint and only one worry. We were dead broke and payday was over a week away We had promised our Honey-ko’s that we would see them next weekend.

Ninety-six a month, non-air-conditioned berthing spaces, one hundred fifteen men sharing the space, sagging bunks, worn out foul weather gear, old gut heavy Chief petty officers, asshole officers and the company of some of the finest men that ever lived.

Oh, to be nineteen again.