THE MARINE WHO FOUGHT A JAPANESE CRUISER AND WON! 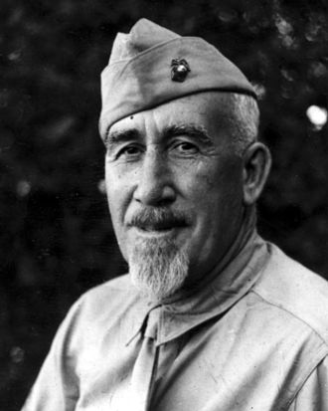 Question: Have you ever heard of Leland Diamond?!

Leland Diamond joined the Marines in 1917 at the age of 27 to fight World War I. Diamond made a name for himself during that war as a Marine’s Marine. He was known for walking around without his cover, wearing his uniform most places he went, and for having a loud and dirty mouth. His uniform violations and occasional lack of courtesy were overlooked because of his conduct on the battlefield.

He shipped to France as a corporal and fought at famous World War I battles like Belleau Wood and St. Mihiel. He earned his sergeant stripes and took part in the occupation of Germany before returning to the states and getting out.

He spent just over two years as a civilian, but the lifestyle didn’t suit him, so he returned to the Corps in 1921.A few years later, he was sent to Shanghai, China to help guard US ships from attacks by Chinese criminals. He returned from China in 1933 but was sent back with the 4th Marines from 1934 to 1937.

When World War II kicked off, he was Master Gunnery Sgt. Diamond and the senior noncommissioned officer and an expert in firing mortars. He was especially well-known for his accuracy with small and medium mortar tubes.

Japanese cruisers in World War II displaced between 7,000 and 9,000 tons and packed dozens of guns. Master Gunnery Sgt. Diamond was armed with a mortar tube and decades of combat experience.Master Gunnery Sgt. Diamond engaged the ship with harassing fire from his mortar. The ferocity and accuracy of his assault spooked the Japanese who withdrew despite the fact that it sported armor, cannons, and a large crew to counterattack with.

The old master gunnery sergeant was lauded for his actions but was still withdrawn from the fight a short time later. “Physical disabilities” resulted in the Marine being evacuated. After a short recovery in New Zealand,Master Gunnery Sgt. Diamond attempted to get back to his unit by getting orders on a supply ship to Guadalcanal. By the time he arrived, the unit had left and he had to hitchhike his way to Australia.

The Corps transferred him home soon after and assigned him to the training of new Marines, first at Parris Island and later at Camp Lejeune.Master Gunnery Sgt. Diamond retired in 1945 and died 6 years later.

2 thoughts on “A MARINE’S MARINE”