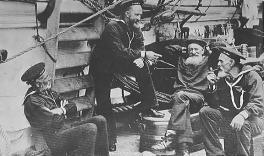 All the old ships are being torn to scrap,

and their high flying flags no longer stream.

The decks are all rusty from neglect,

and a suffering from not being used anymore

Things have all changed, everything rearranged,

a time and a world that is no more.

Where is an old worn out shorebound,

once squared away Asia Sailor to go?

The whiskey that once fueled the liberties,

and pushed the memories of war aside.

And the memories grow stronger with each drink.

The girls that healed our souls and were so pretty,

now populate our dream and memories.

Where is this old sentimental,

once proud Bluejacket to go?

There was an island, there was the heat and

a river that raised a smelly barrier to paradise.

She waited there, with a smile and guile

for the sailor who would love and take her away.

That paradise where he once partied is changed.

It isn’t that he blames anyone for changing it.

He just wishes they were taking it slow,

cause where is an old, slow-moving Asia Sailor to go?