The Vietnam War Defined Us

No event in American history is more misunderstood than the Vietnam War. … When the sailors and soldiers came home from Vietnam, there were no parades, no celebrations. …

Quotes from some who were there:

“Fifty years since my first footprint in Danang. A sound, smell, a song and I’m back there. Fuck 50 years…

“When I left the ship, I just thought, Gosh, I can’t stand being in the military. Blah blah blah. I remember the older enlisted guys and Chiefs saying, ‘Son, when you get out, you’re going to miss it, miss your shipmates.’ I was like, ‘No way.’ But sure enough. I missed the responsibility. I want people to take responsibility for what they’ve done. In the civilian world, you don’t see that.”

“Pot is better than Peanut Butter.”

“The only good things about this war are beer, pot, and pussy.”

“Fuck ’em, what can they do? Take away my birthday and send me to Nam?”

“Gosh, there are so many people here who don’t know what it is like to wear the uniform and serve your country overseas. I’m really grateful.”

“When they came back, a lot of people said they got PTSD. Yeah, right. Get over it. I saw more and done more than half of them anyway, and I’m not bothered. So what’s the problem?”

“Some people didn’t say anything, and it just grew and grew inside of them. I wanted to let it out. Even now that I’m back home, and I sometimes look at the pictures of the ship and the guys, and sometimes I cry.”

“It was tough being home and watching the news, knowing that those guys I went with were going back. Seeing Marines every day dying on TV made me want to go back. I got out and took a job working security for 13 bucks an hour, and it didn’t mean anything. Luckily, I got a job at the fire department, got the therapy — even if I have nightmares or flashbacks, now it’s just an experience I had. Some guys got out, and they hung themselves.”

Everybody respects the Vietnam Veterans of America. — R. Lee Ermey

“Guns don’t kill people, I DO”

“Going home tomorrow.” Written on a helmet resting on a body bag.

“Shoot all night, load ammunition and fuel all day, they feed us fucking powdered eggs and tough ass roast beef, six on and six off watches, no fucking sleep, and we gotta stay out here because some fucking broke dick state sider is stuck in Subic for repairs. I hope they are paying my girl for the pussy I ain’t getting.”

Seen on a shithouse wall in Danang: “These fucking Zipper heads either have the Clap or TB.”

Written underneath: Then just fuck the ones that cough you stupid shit.”

“The only thing the French taught the Viet’s was how to make good French Bread and suck dicks.” 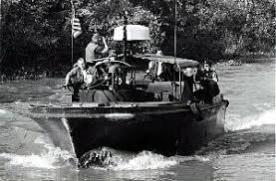 [I]t seems now more certain than ever that the bloody experience of Vietnam is to end in a stalemate… [I]t is increasingly clear to this reporter that the only rational way out then will be to negotiate, not as victors, but as an honorable people who lived up to their pledge to defend democracy, and did the best they could. — “This is Walter Cronkite. Good night.”

“What is astonishing about the social history of the Vietnam war is not how many people avoided it, but how many could not and did not.”

“There was a time when liberalism was identified with anti-Communism. But the Vietnam War led liberals into the arms of the Left, which had been morally confused about Communism since its inception and had become essentially pacifist following the carnage of World War I.”

“Hollywood never knew there was a Vietnam War until they made the movie.”

“I was listening to the free radio stations and I noticed that during their war coverage they were playing these songs born out of the Vietnam War that were all critical of the soldiers.”

From a Desert Storm vet: “The first week back, I was the best man in a wedding, and I had a Vietnam War veteran come up to me, and he handed me $50 and said, ‘Take your wife out to dinner. I appreciate what you did. We didn’t get the welcome we deserved when we got back, and I don’t want that to happen to you; I want you to go out and enjoy yourself.'” — A Navy Corpsman

4 thoughts on “The Vietnam War Defined Us”