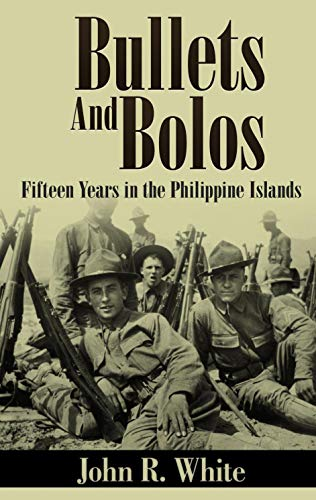 Recently my shipmate Ken Ritter gifted me an e-book written by John R. White, a man who served in the embryotic Philippine Constabulary during the period 1901 through 1915. The book was originally published in 1928 and republished this year.

It was a seminal time in Philippine history. The Philippines had been ceded to the United States by Spain after their defeat in the Spanish-American war. The Spanish had viewed the P.I. as a possession whose purpose was to serve the King of Spain. The Filipino tribesmen were little more than slaves and were basically left to their own pursuits unless a Spanish official wanted their labor, their possessions, or their women.

The Catholic church saw the islands as a land of heathens to be converted to the church. They established churches and monasteries on many of the northern islands. The southern islands were peopled by the Moro tribesmen who practiced a form of Islam and were wont to send the Catholics on to meet their God.

Into this conglomeration of islands and tribal cultures, the United States was determined to bring law and order and a semblance of peace and cooperation among the varying parties.

The author was a junior officer in the Constabulary tasked with recruiting and training Filipinos to act as quasi-soldiers in various areas and islands in the Archipelago. He details the battles against bandits and robbers and operations with the military.

Unlike many writers of the period, he speaks from the authority of many years of living and fighting with and against the locals of the many islands.

Excerpts from the book:

“When account is taken of the fact that there were no American women within a score of miles, and that those of our fellow countrywomen whom we occasionally saw were mostly of that angular variety that devotes itself to pedagogy (teachers), is it to be wondered that the soft charms of Encarnacion, Conchita, Consuela, Aurelia, Paz—the very names of the girls carry a seductive lilt—seemed real and not at all exotic to two youths whose hot young blood was stimulated by climate, food, and drink.”

“In the tropics, there is no spring with balmy breath and bursting buds; no autumn with the first crisp frost to sere leaves and make the garden flowers droop their heads; there is only the quick transition from dust and drought to mud and moisture.”

“I often think that our best and perhaps only reward for Philippine service will be the satisfaction of work well done and friends ‘grappled with hoops fo steel.’”

“The attitude of American women in the islands is natural enough. Fear motivates us all, and the American women, whose charms often faded under the tropical sun, might well fear the seductive little brown women who blended so well ”with the climate and the palms and the white-hot nights'”

“What, I wonder, will be history’s verdict on our action in keeping the overflowing millions of China out of the almost unoccupied land of Canaan at their feet. And what people in history have had the luck of the Filipinos to find a protecting nation apparently willing to sacrifice her own interests and put a dam across all economic and racial currents in order to give them a chance to work out their own salvation, unsubmerged by the Chinese flood to the north? Every Filipino boy and girl should nightly kneel at prayers and say ‘God bless Uncle Sam and keep him generous for all time.’”

The book is a good read and refutes the claims of many around the world that the United States had and has colonial aspirations.

I highly recommend it

2 thoughts on “Bullets and Bolos”