How many of you seen this “Navy Recruiting Poster” before?!

Trivia: Do you know the history of this poster and who the model was?!

ANSWER: The model enlisted in the Navy and became a Chief Petty Officer.

In 1917, as America entered WWI, thousands of young men rushed to join the Army, Marines, and Navy.

Bernice Smith was an energetic 20-year-old woman who stopped by her local California recruiting office and was very interested in signing up with the US Navy.

Upon seeing all of the young men enlisting in the Navy, Bernice suddenly blurted out the words, “Gee I wish I were a man, I’d join the Navy.”

Little did Bernice realize that also present at the recruiting station was one of America’s most famous illustrators, Howard Chandler Christy.

Chandler had done many illustrations for various magazines over the years, but with the outbreak of the war, he was asked by the government to develop a series of military recruitment posters.

Since in 1917 there was no television or radio to broadcast recruitment appeals, posters became the best way to get the public’s attention.

Impressed by what Bernice had said, Chandler approached her and asked if Bernice would agree to pose as his model for an upcoming Navy recruitment poster.

Not only did Chandler draw her dressed up in a Sailor’s outfit, but used her recruiting office quote as the central message of the poster.

This was also the first time sex appeal was used in a recruiting poster.

Chandler’s intent was to use the sexy image of Bernice in the poster to encourage men to join the Navy.

However, in Bernice Smith’s case, an amazing thing happened.

Ten days after posing for Chandler Christy, Bernice went back to her local recruiting office and successfully enlisted in the Navy becoming the first California woman to do so.

Bernice had a successful three-year career in the Navy and eventually rose to the rank of Chief Yeoman.

During WWII, Bernice tried to re-enlist in the Navy but was turned down due to age. The Army did, however, accept her and she served a tour of duty in the Army.

After WWII she did clerical work in California veterans hospitals. She retired to Retsil, Kitsap County Washington. 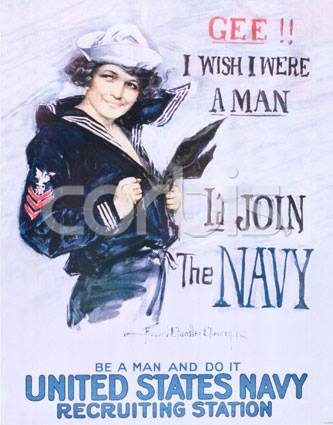