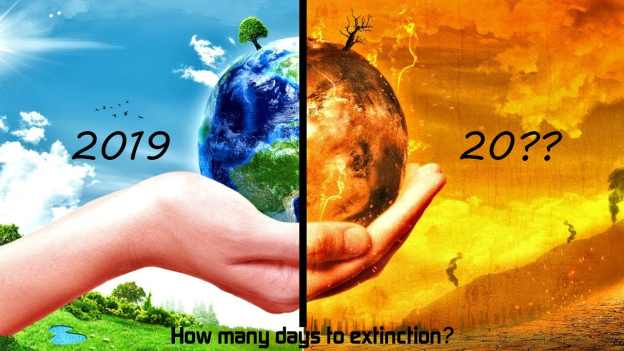 Brtt walked slowly back toward the hovel where his mate and last living child waited hoping that he would catch something to eat, but like the animals of the land, the fish were dying. It had been seven days since he had caught one. Perhaps it was the last of the fish, he thought as he stopped, gasping aggressively for oxygen. After a few minutes, he staggered onward toward what he could see only as the end. After a number of stops, he arrived at the place where his mate and daughter waited only to find that they had succumbed during the day. He lay down beside them and sometime during the night the man who was the last human being on the third planet from the sun, once called Earth, died…

Five thousand three hundred years earlier… Most of the nations of the world had been torn apart by a rift between those who discounted the effects of the sun and believed that humanity was the cause of rising global temperatures and those who said that fluctuating temperatures were caused by the sun and short term fluctuations in temperatures weren’t reliable to base theories of global warming or cooling.

Carbon dioxide became the culprit. The global warming faction held that a buildup of CO2 in the air and trapping the heat radiated by the sun was the cause of rising temperatures and mankind was the cause of the increasing CO2 levels.

During the mid-twenty-first century, the global warming faction gained political power in the primary developed nations of the world. They arbitrarily forced laws that mandated the elimination of fossil fuels, ordered the scrapping of all vehicles with combustion engines, and grounded all aircraft other than early model electric solar-powered aircraft.

These actions threw the world into a great depression and the population into a panic. People in the cities were rioting and fighting with each other over dwindling food supplies while crops in California and the Midwest rotted in the fields without the machines to harvest and transport them. Many diseases weres rampant, people were dying. The pharmaceutical companies’ distribution networks were no longer operational. Sewage and wastewater systems failed, freshwater supplies dwindled as fewer and fewer people were available to man the controls and repair breakdowns. The Elite members running the government saw the lessening of the world’s population as beneficial in their fight to control the change in the climate.

A note here: Plants take CO2 from the air and, using the energy of sunlight convert CO2 into carbohydrates and oxygen in a process called Photosynthesis. The process can be described as breathing in CO2 and breathing out oxygen

Climate scientists, in an effort to produce a mechanical means of removing CO2 from the air, developed technology that mimicked the process which plants used to accomplish this. Instead of breaking the CO2 down into its molecular components and releasing the oxygen back into the air, they pumped the captured CO2 deep underground. This, in effect, removed both CO2 and Oxygen from the air since the O2 component of the formula wasn’t being returned to the atmosphere. The first and most touted of the CO2 plants was built near Schenectady. Two months after it went into full operation a dissident group overran the facility, massacred the scientists and operators and using explosives, destroyed the machinery and the building complex.

The Elites around the world ordered the CO2 processing plants to be rebuilt and equipped with a state of the art robotic operational and defense system all controlled by Artificial Intelligence. Only certain scientists and politicals were identified to the AI system as being authorized to enter the facility. One hundred eight of the Carbon Dioxide Synthesis plants were built around the world using a combination of solar, wind, and the energy produced by the rotation of the planet to power them. They were enclosed, self-aware mechanical systems capable of repairing and maintaining themselves indefinitely.

The little innocuous virus had existed for centuries. It caused no trouble for any other living organism on Earth. It was marginal due to the level of Carbon Dioxide and Oxygen in the atmosphere. One could say it was hanging on by a tentacle. As the levels of CO2 and Oxygen in the atmosphere lessened, the little virus took on new life, mutated into what was to become a virulent strain which swept around the world and killed four-fifths of the population of Earth. The rest of the population seemed to have a natural immunity to the virus and without a host to prey on, it reverted to just being another virus while waiting for another victim.

The Elites weren’t exempt from the plague. All the politicals and scientists with access to the plants were killed. No one alive could halt the process of CO2 being removed from the atmosphere. The plants were impregnable and killed any life form that wandered too near.

As the centuries passed, the dwindling humanity had devolved to a caveman lifestyle living in the ruins of the cities adopting a hunter-gatherer method of subsistence. As the thousands of years passed, plants and trees became fewer and stunted because of the lessening CO2 and consequently, other life forms became fewer and fewer and died. Temperatures dropped because of lesser free CO2. Ice built up at the poles and began to slowly creep southward and northward to eventually meet at the equator.

The point was finally reached where most land life that depended upon CO2 or oxygen had died. The action of the oceans captured oxygen from the air that nurtured sea life. With less oxygen in the sea, many marine species became extinct. Those species living at greater depths will possibly survive the coming ace age when the planet becomes a frozen ice ball.

… and sometime during the night the man who was the last human being on the third planet from the sun, once called Earth, died from lack of oxygen…