More than two weeks had passed since the Japanese laid down their arms and declared they would no longer fight the Allies in the Pacific.

The US and the other Allies organized a ceremony in which Japanese representatives would sign an Instrument of Surrender, formally marking the end of World War II.

The site chosen for the ceremony was Tokyo Bay.

By 2 September 1945, more than 200 Allied ships were moored in the bay, eagerly awaiting the moment that would finally bring the hostilities in the Pacific to a close.

Among the ships was USS Missouri BB-63, an American battleship launched after the attack on Pearl Harbor. Perhaps because it was named for his home state, President Truman decided that USS Missouri would host the surrender ceremony.

It was one of the most important events ever to take place aboard an American ship.

As Officer of the Deck on the morning of the ceremony, USS Missouri’s navigator, Lieutenant Commander James L. Starnes, played a major role in ensuring it went off without a hitch.

Although he had only joined the Navy a year prior to the Pearl Harbor attack, Lcdr. Starnes found himself responsible for the logistics of the somewhat complicated ceremony. Considering the magnitude of the event, with the entire world watching and listening, the pressure was high.

As Starnes quickly found, organizing an event of such importance wasn’t going to be simple. One of his decisions, to have attendees wearing formal military attire, was overturned by General Douglas MacArthur. Starnes recalled MacArthur saying, “We fought them in our khaki uniforms, and we’ll accept their surrender in our khaki uniforms.”

Lcdr. Starnes worked alongside the USS Missouri’s Captain and the Admiral’s staff to embark and disembark nearly two hundred correspondents and photographers from all over the world.

He also helped ferry the Allied and Japanese officials who were to participate in the ceremony on what came to be known as the Surrender Deck of the USS Missouri.

The importance of the ceremony wasn’t taken lightly, and rehearsals were held to pinpoint the time it would take the Japanese delegates to arrive on the surrender deck from their smaller boat.

This became more complicated when it was determined that Japan’s foreign minister, Mamoru Shigemitsu, would take part in the signing.

Shigemitsu had lost a leg several years prior, and walked on an artificial limb. In order to estimate the amount of time he would require, Sailors strapped mop handles to their legs and simulated his walk.

Clouds hovered over Tokyo Bay on the morning of the ceremony and cast a gray shadow over the momentous occasion.

That didn’t dampen the mood off the coast of Tokyo, however, as representatives from the US, the UK and the other Allied nations, and Japan gathered for the historic moment.

As Officer of the Deck, it was Lcdr. Starnes who greeted the arriving dignitaries.

As the Japanese came aboard USS Missouri, there wasn’t a sense of animosity between the former adversaries.

“This was peacetime. It was a very formal, very dignified ceremony.”

The event unfolded with only minor hitches: one delegation signed the document on the wrong line, and the flyover of more than 450 planes was delayed until just as the Japanese were disembarking. When it was over, the world was once again at peace. 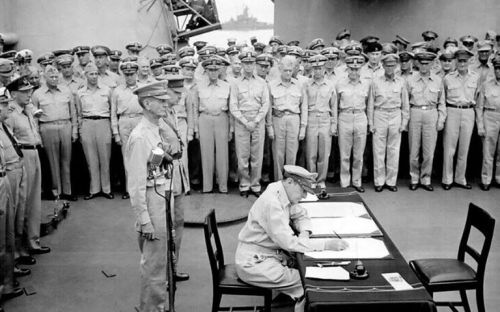