People Watching in the Chemo Room 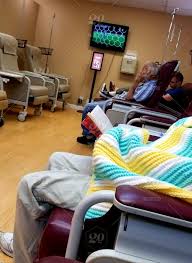 People-watching in the Chemo room was especially interesting today.

I arrived at Tripler for my Chemo session a little before seven o’clock. I scored space in Handi parking. As I was getting out of my car, a new Lexus, driven by a pretty young oriental woman pulled into an adjacent space. The fashionably dressed young woman got out and took a walker from the back seat and walked around her car as I started my trek to the Chemo room check-in desk. I decided that she must be a caretaker for the old guy I could see in the passenger seat. I checked in with the receptionist and was called right away for vital signs. I gained two pounds since yesterday, but then I have not taken my daily crap yet! I was told to wait until the Chemo room called for me.

I was waiting when the pretty Asian girl and the skinny white senior citizen walked in, she got him seated and took his ID to the receptionist. She came back to the old dude and told him that it would be a few minutes. She spoke English as if it were her first language. There was no hint of an accent. Those of us who spent a lot of time out there can usually tell if a woman is Japanese, Korean, Chinese, or Filipina. I thought she may be Vietnamese. I suspected the girl was the old dude’s daughter, although she did not appear to be tainted by the Caucasian brush. I was called to the Chemo room where they hooked me up and started a liter of saline solution to hydrate me. In addition to Chemo, they flush your kidneys also. Kinda like getting a radiator flush free when you go in for an oil change.

I was relaxing there with liquid expanding my bladder and watching the Stock Market go to shit on my personal TV when the girl and old man came in for his Chemo. The nurse called them by name, Mr., and Mrs., who woulda thunk?

I decided it was probably a case of True Love. He loved her and she loved the money that could buy her pretty things, nice clothes, and a brand new Lexus to drive.

An elderly man in a wheelchair was pushed in by a middle-aged Filipina. The nurse greeted them by name and asked him how he was as she retrieved the cart of implements and a wheeled stool. He told her that he was not good. She asked another question. He did not answer but slumped forward, unconscious. She called something to the desk STAT. A minute later two doctors ran in and checked him out. They left. A short time later one doctor returned and said the orderlies had been called and he was going to escort him to the Intensive Care Unit. The sad part came when the doctor informed the wife that due to COVID restrictions she would not be permitted in the ICU.

A young doctor in his thirties from Podiatry came in for bloodwork in preparation for tomorrow’s Chemo.

A woman came in for an initial exam and indoctrination before Chemo begins next week. The nurse recommended the installation of a portal because she has poor veins that may not support bi-weekly punctures. He explained that they would surgically implant the port in her chest and connect it into a blood vessel. The port would facilitate drawing blood or infusing Chemo medications into her system.

At the time, I was the only person there with a port. She must have asked a thousand questions. She finally agrees saying, I thought cutting my titties off was all the surgery involved in this process.

Another old dude came in riding a wheelchair. The nurses had quite a chore lifting his fat ass from it to the recliner. The nurse said, your temperature is slightly elevated, and I noticed you are coughing a little. The dude immediately denied having a temperature. The nurse asked if he took his temperature at home. He said that he didn’t have to, that he could tell when he had a temperature. The nurse took it again and it had risen more than half a point in about an hour. They moved him back into the wheelchair sent him off for a COVID test. The staff took everyone’s telephone number. If he pops positive, we will all have to get a COVID test and quarantine fir two weeks.

As I was leaving, this fat old dude wearing a denim vest. You could see extraordinarily little denim. He had the vest covered with so many Vietnam patches that it appeared as if the vest was made of patches. He was also wearing a ball cap covered with American flag pins. It seemed he didn’t want anyone to doubt his patriotism. He was also wearing at least two, what appeared to be silver, rings on each finger and thumb. And he was wearing rubber slippers and his toenails were painted in differing colors.

If today was my last Chemo, I am going to miss the people…

5 thoughts on “People Watching in the Chemo Room”