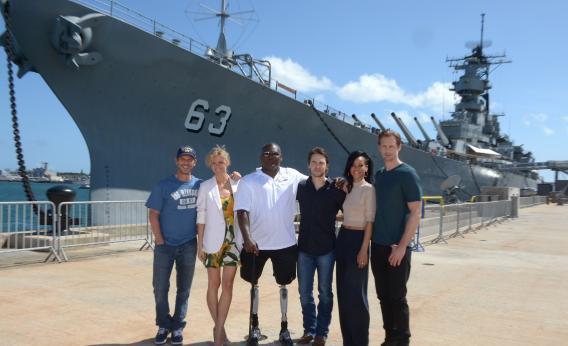 Just like the cops say, the perpetrator always returns to the scene of the crime.  I live in Honolulu and visit the USS Bowfin and USS Missouri museum ships about once a year.  I have visited the Midway once since they moored her in San Diego.  These museum ships are designed to relieve the public of money and to allow so-called “docents”, who never served in the ship,  to  herd them from soda machine to snack machine around the decks.  They probably got a lot of their knowledge of ships from the movie “In Harm’s Way,” or from paperback books.  For ten dollars, they feed you fairy tales and bullshit.  In Baltimore, they went so far as to paint shark’s teeth on a proud old submarine.

They keep the old ships looking good when it comes to their outward appearance.  They paint them and buff them to lure the tourists and their dollars.  Although the exteriors look ship shape, keep in mind that, “Beauty is only four or five coats of paint deep.”  I remember an old Chief Boatswains Mate that always said, “Rust never sleeps.”  Look past all the cosmetic work and find patches of rust flakes and oxidation.  I guess the people who run these museums can’t see oxidation’s equivalent of cancer and figure the public can’t either.

Like a good looking woman, these old ships are high maintenance creatures.  When a fellow gets married, he expects the expense of buying lipstick, beauty parlor visits, fashionable clothes, mammograms, and pap smears.

There are many qualified volunteers who make a valiant effort to keep these old gals looking and feeling well.  You could call them fairy godmother’s who travel for miles to spend their weekends doing work every bluejacket, back in the day, did his best to duck.  Old guys who need Geritol, Budweiser, Jack Daniels and Viagra.  Old guys screwing around with cutting torches, skill saws, and doing the work that the lazy-assed municipal bloodsuckers who crave the tourist’s dollars should not have deferred.  The same people who promised the Navy to be responsible stewards of these fine old fighting ships. Instead, they load snack and soda machines in every available space and consign them to fall apart from the rust.

When you give a kid a puppy, you tell him, “You can have the puppy but if you don’t feed and care for it will get sick, starve, and die.”

Children don’t have a bunch of old sailors with tattooed tallywhackers and black oil pumping through their veins to bail out their worthless asses when the dog gets sick and fleas.  But many of the cities are like the child, they take the ship and take pleasure from the tourist dollars it brings in and then places plywood walkways down as sections of the decks rust away.

No, in the true American tradition, responsible adults. The kind of men who stop and give a hand at auto wrecks. The kind who donate blood regularly. The kind who take the neighborhood elderly shopping. The kind who make the time to be PTA board members, Little League coaches, Scoutmasters, and Vestrymen. The same kind of men we served with, are proud to call shipmates, and who made up the ship’s company on some of the best ships God and United States shipyards ever built.  These marvelous men will show up and bail out the worthless good-for-nothing asses of the assholes who promised the Navy to take care of the ships. Kind of makes you proud to be one of that generation of sailors.

I have heard others say that it is a shame our proud old ships have to go to the breakers.  But, I ask, what is worse, to be dismantled and recycled into useful metals instead of being left to rust away under the poor care of a money fueled tourism industry.  Better to take them to sea and pull the plug.

2 thoughts on “Rust is Forever”