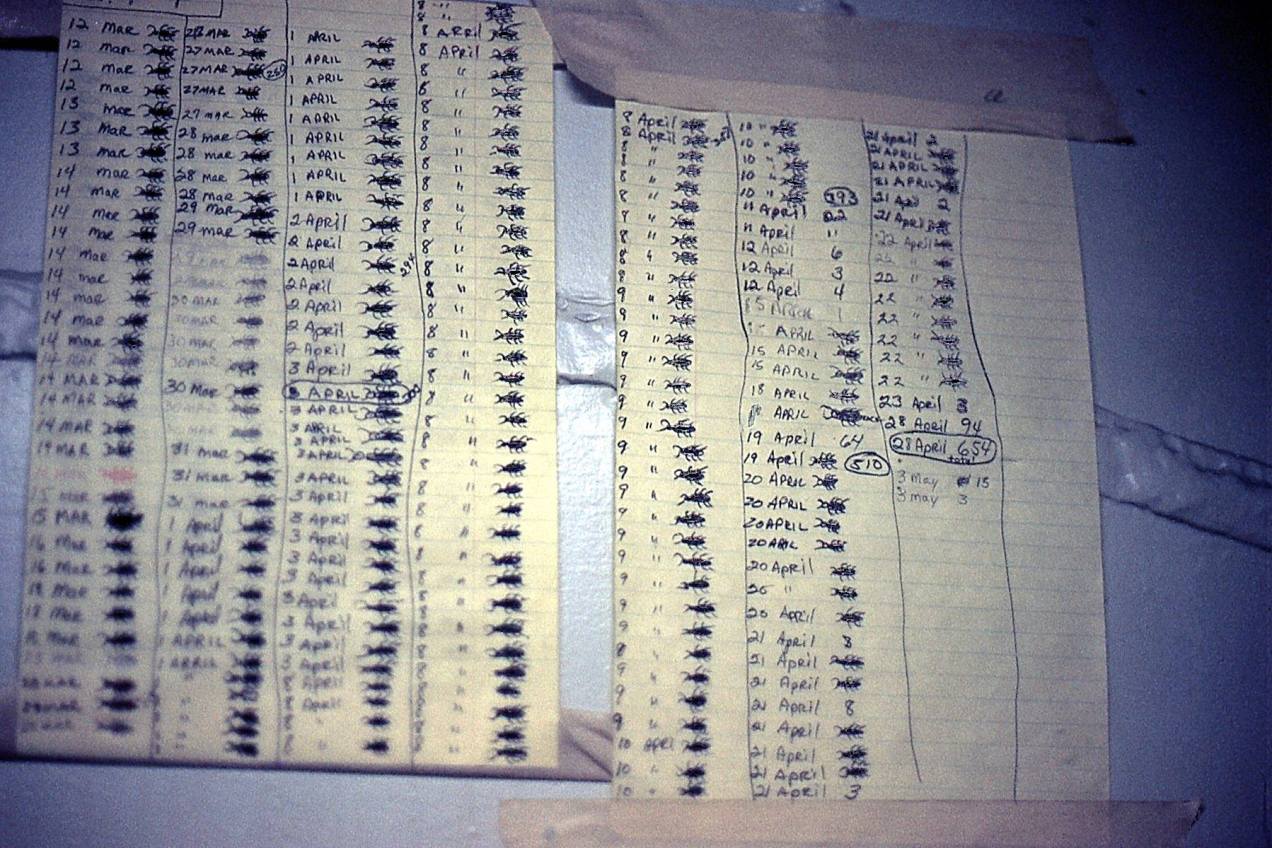 Note: The photo above and this statement on FaceBook by my shipmate and an excellent photographer Dick Hanover reminded me of this one:

“AIMD berthing, starboard side aft, 3rd deck. Strips of tape were stuck to the bulkhead with the ends folded over so the strip was sticky-side-up. The roaches would run across it on their way from the bilges to the Officer’s Mess directly above on the second deck and their big rear feet would stick. Each night we’d count the day’s catch and note on the Roach Calendar. I ended up with a prime rack when the Air Wing departed but inherited the Roach Calendar in the process.”

Having been assigned as the Chief Cook in seven ships, the ship’s corpsman and I have been held responsible for cockroach infestations on four of the seven.  The XO had to lay the blame on someone; the cockroaches hung out around the Galley and mess decks; I was in charge of those spaces; Doc was responsible for pest control; ergo we must be the cause of the cockroach infestation.

The ATA that I served in didn’t have cockroaches.  The son of a bitch rolled so bad sitting alongside the pier that any cockroaches that did get aboard became seasick and immediately went ashore. The two FF’s I rode out of Yokosuka never really had a roach problem.  We figured the cockroaches hated the top-heavy mothers as much as we did.

The Forrest Sherman class can that I rode was cockroach heaven.  I think that when cockroaches were killed anywhere in the fleet, instead of going to heaven, they came to the Morton.  Either that or we had the horniest cockroaches in the fleet.  I think it was a combination of both.  We got back two for everyone we killed.   The XO made the Doc come onto the pier and spray boxes when we were loading stores to prevent getting cockroaches aboard.  It was akin to turning off the faucet to the sink when the bathtub was overflowing.  We cleaned, we sprayed and nothing seemed to help.  I found that a live steam hose was more effective than any poison.

The crew was so used to the cockroach infestation that comments like this were heard: “Fuck man, there’s a cockroach in my salad.”  “Don’t worry he won’t eat much.” or “Fuck, I didn’t get one.”

A cockroach is strolling across the deck.  A crewmember tells it, “If you walk on this tile, I am going to stomp your ass.”  And lets it live if it avoids the tile.

During GQ while on the gun line, to amuse themselves, the members of Repair II capture a half dozen roaches and paint different colors on their backs. They put them in an empty can, draw a circle on the deck, bet on the colors, dump the roaches in the center of the circle; the first one out of the circle won the bet.

The largest infestation in Midway was in the after Bakeshop.  The lagging was ripped and torn and the bugs had worked their way in and were impossible to eradicate.  The only solution was to rip out the lagging and replace it.  Fortunately, we had two bakeshops.  We secured the aft shop, formed a tiger team of cooks and mess cooks and ripped out the lagging, preserved and repainted the bulkheads, laid down a spray of residual cockroach poison and lagged the space.  That solved our cockroach problem.  During the ’82 Ney Award inspection, the inspector from BuMed was surprised that he was unable to find any cockroaches, especially on a ship as old as Midway.  He mentioned this to Captain Owens during the de-brief.  Owens blew out a mouthful of cigar smoke and said, “You want to see cockroaches? Come on back to my pantry.”

Archeologists have found fossils of cockroaches over sixty-six million years old.  Cockroaches survived the calamity that led to the extinction of the dinosaurs, numerous ice ages, floods, volcanoes, wars, and even nuclear explosions.  A cook with a steam hose and a corpsman with a spray can did not stand a fucking chance.

But in perspective, the cockroaches aboard our ships were midgets compared to some I have seen in the tropics.  There are cockroaches in the PI large enough to stand flat-footed and fuck a Chihuahua.

One thought on “Cockroaches”