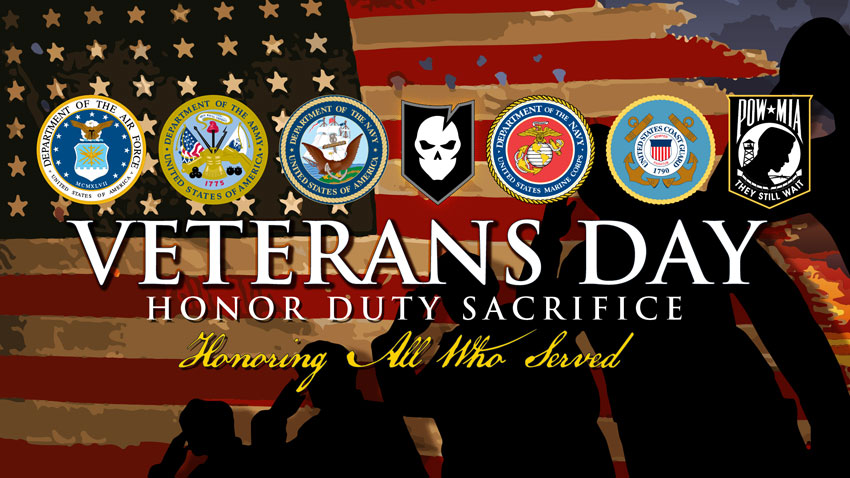 When you go home,
Tell them of us and say,
For your tomorrows,
We gave our today

This famous epitaph by John Maxwell Edmonds speaks of those who did not return.  It also applies to those of us who did come home.  We gave up the comfort and luxuries of that home to those who didn’t serve.

Today is the holiday we celebrate as Veterans Day. It originated as “Armistice Day” on Nov. 11, 1919, the first anniversary of the end of World War I. Congress passed a resolution in 1926 for an annual observance, and Nov. 11 became a national holiday beginning in 1938.

Veterans Day is often confused with Memorial Day, a common misunderstanding. According to the U.S. Department of Veterans Affairs, Memorial Day (the fourth Monday in May) honors American service members who died in service to their country or because of injuries incurred during battle, while Veterans Day pays tribute to all American veterans, living or dead, but especially gives thanks to living veterans who served their country honorably during war or peacetime.

I was ten years old in 1954 and remember when President Eisenhower officially changed the name of the holiday from Armistice Day to Veterans Day. In 1968, the Uniform Holidays Bill was passed by Congress, which moved the celebration of Veterans Day to the fourth Monday in October. The law went into effect in 1971, but in 1975 President Ford returned Veterans Day to November 11, due to the important historical significance of the date.

Britain, France, Australia and Canada also commemorate the veterans of World Wars I and II on or near November 11th: Canada has Remembrance Day, while Britain has Remembrance Sunday (the second Sunday of November). In Europe, Britain and the Commonwealth countries it is common to observe two minutes of silence at 11 a.m. every November 11.

The brave men and women who serve and protect the U.S. come from all walks of life; they are parents, children, and grandparents. They are friends, neighbors and coworkers, and an important part of their communities. Here are some facts about the current veteran population of the United States.

There are approximately 23.2 million military veterans in the United States.