The Black Ships was the name given to Western vessels arriving in Japan in the 16th and 19th centuries.

In 1543 Portuguese initiated the first contacts, establishing a trade route linking Goa to Nagasaki. The large carracks engaged in this trade had the hull painted black with pitch, and the term came to represent all western vessels. In 1639, after suppressing a rebellion blamed on the Christian influence, the ruling Tokugawa Shogunate retreated into an isolationist policy. During this “locked state”, contact with Japan by Westerners was restricted to Dejima island at Nagasaki.

In 1844, William II of the Netherlands urged Japan to open, but was rejected. On July 8, 1853, the U.S. Navy steamed four warships into the bay at Edo and threatened to attack if Japan did not begin trade with the West. Their arrival marked the reopening of the country to political dialogue after more than two hundred years of self-imposed isolation. Trade with Western nations would not come until the Treaty of Amity and Commerce more than five years later.

In particular, Black Ships refers to Mississippi, Plymouth, Saratoga, and Susquehanna of the Perry Expedition for the opening of Japan, 1852-1854, that arrived on July 14, 1853 at Uraga Harbor in Kanagawa Prefecture, Japan under the command of Commodore Matthew Perry. Black refers to the black color of the older sailing vessels, and the black smoke from the coal-fired steam engines of the American ships. In this sense, the kurofune became a symbol of the ending of isolation.

Commodore Perry’s superior military force was the principal factor in negotiating a treaty allowing American trade with Japan, thus effectively ending the isolation period of more than 200 years in which trading with Japan had been permitted to the Dutch and Chinese exclusively.

The sight of the four ships entering Edo Bay (Tokyo Bay), roaring black smoke into the air and capable of moving under their own power, deeply frightened the Japanese.Perry ignored the requests arriving from the shore that he should move to Nagasaki—the official port for trade with the outside—and threatened in turn to take his ships directly to Edo, and burn the city to the ground if he was not allowed to land. It was eventually agreed upon that he should land nearby at Kurihama, whereupon he delivered his letter and left.

The following year, at the Convention of Kanagawa, Perry returned with a fleet of eight of the fearsome Black Ships, to demonstrate the power of the United States navy, and to lend weight to his announcement that he would not leave again, until he had a treaty. In the interim following his previous visit, the Tokugawa shogunate had learned about the staggering destruction of the Chinese fleet by a handful of British warships in 1841 during the First Opium War, and about China’s subsequent loss of Hong Kong to British sovereignty. The shogunate realized that—if they wished for their country to avoid a similar fate—they would need to make peace with the west.

After a roughly a month of negotiations, the Shogun’s officials presented Perry with the Treaty of Peace and Amity. Perry refused certain conditions of the treaty but agreed to defer their resolution to a later time, and finally establishing formal diplomatic relations between Japan and the United States. The eight ships departed, leaving behind a consul at Shimoda to negotiate a more permanent agreement. The Harris Treaty was signed with the United States on July 29, 1858, and within five years of the signing of the Treaty of Peace and Amity, Japan had moved to sign treaties with other western countries.

The most famous festival of Shimoda celebrates in honor of the arrival on the Blackship and Commodore Perry landing in Japan to the world. The three-day festival commemorates the arrival of US Commodore Mathew Perry 152 years ago. It was US Commodore Mathew Perry and a squadron of nine so-called black ships that forced the opening of Shimoda port in 1854. His statue stands in Shimoda City where he disembarked his black ship. There’s also a street named after him. The Black Ships Festival celebrates the signing of the treaty, which brought the two countries together as trading partners. Lively parades and events commemorate the arrival of Commodore Perry.

A shipmate’s story of one Black Ship festival.

SO, not really a “sea” story, but a river story…The Japanese port-city of Shimoda hosts an annual “Black Ship Festival”, in honor of Admiral Perry’s 1854 visit to Japan and the US Navy sends a ship there every year as an emissary of good will.

My visit there was while aboard the USS WHITE PLAINS (AFS-4). On our Black Ship visit, the town invited a crew of us to come to the river thru town, where it was reported the townsfolk had prepared a raft for the WHITE PLAINS to participate in the Black Ship river race. I don’t remember who I went with, but four of us got down to the river and were floored by the wonderful range of very ornate and creative rafts already in the river…There was a replica of Perry’s ship, a space shuttle, a VW, several neat “junks” …just a great show. Then they took us to our “vessel”…a “plank” deck of about a half-dozen bamboo poles secured on top of 3 inner tubes, with a couple of bamboo “flag poles’ drooping to port and starboard. Well, we weren’t going to let our meager vessel dim our enthusiasm….although the fact that all the other crews were covered head-to-toe in wetsuits and hypothermia gear and we were in cut-off dungarees and t-shirts. THAT gave us some pause. Nonetheless, we climbed into the frigid, scrotum-shrivelling water, and when the starter gun fired, we paddled for all our worth—-bamboo deck a rattlin’, flagpoles flailing madly like samurai swords cutting the air…and while everyone else’s magnificent rafts puttered about or started to come apart under the strain, we managed to keep our cluster of sticks and tubes moving rapidly downriver and finished 3rd out of a field of about 50.

Well, 1st place prize was a couple bottles of sake and Suntory whiskey, 2nd place was a case of Budweiser and 3rd was a case of frozen fish. We accepted our frozen fish with grace, but the 2nd place team could sense our disappointment and bewilderment…What the FUCK were we sailors going to do with a giant box of frozen fish?–and they swapped us the case of beer…which we sat down with them on the rivershore and drank. Captain Kerr had given us a handful of WHITE PLAINS Zippo’s to give out…I got too drunk and forgot to give out my last two…We ended the night in a big pile of snoring sailors on the tatami mats of some local’s living room. I gave him one of the remaining waterlogged Zippo’s as we left the next morning. By the proud look on his face, I could have spent the next night with his daughter… SHIMODA BLACK SHIP FESTIVAL, 1983. 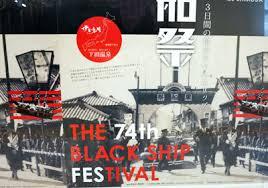 One thought on “Black Ship Festival”