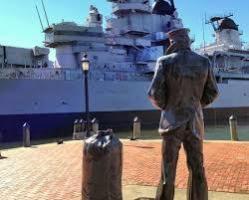 If you get locked up a friend will bail you out,

A shipmate will be sitting in the cell beside you saying, “That was fucking awesome, Dude.”

A newly enlisted young man was sitting on his front porch the day before he was to leave for San Diego and the Naval Recruit Training Depot. He was sipping iced tea while he talked with his grandfather, a retired Chief Petty Officer. As they talked about his life, becoming an adult, the obligations, and the adventure that awaited him, the grandfather rattled the ice in his glass and cast a clear sobering look at his grandson.

“Never forget your shipmates”, he advised, “they will be there with you through bad times and good and become more important to you as you grow older. Regardless of how talented and efficient you are, regardless of how much you love the girl you will someday meet, and the children you will have with her, you will always need friends and a shipmate is more than just a friend. Keep in contact with them.

Yet, he obeyed his Grandfather; kept in touch with his Navy shipmates. Although he had civilian friends, he didn’t seem to have the same connection with them as he did with the group of men whom he had suffered through endless days and hours, through tedious hours at General Quarters on the gun line, through midnight unreps and refueling, through sweaty nights when the ventilation was down, through monotonous meals, and through glorious times on liberty in myriad Asian ports. Over the years he realized his grandfather was a very wise man.

Time carries out its design on a person, friends become a bulwark of life. A shipmate is a brother with whom bonds are stronger than the concept of mere friendship. After sixty or seventy years, we learn that time passes, life goes on, and children grow up and go to their own life. You can no longer do physically that which you did when you were young.

Your parents died but you moved on. Colleagues, relatives, and acquaintances forget favors you did them. A friend will be there for you if it doesn’t cost too much in time, effort, or money. They’ll go to church and assure you that they are praying for you. They’ll sometimes visit with you for a while. Often grudgingly.

Shipmates you haven’t seen in twenty years are known to drive halfway across the country to visit you at home or even in the hospital. He will show up with a case of cold beer and a hundred stories about all the good times. He will even make the bad times sound good. Welcome him with open arms for he is a true blessing in your life.

We started this adventure called the Navy without knowing of the incredible joys, hardships, and sorrows that lay ahead. We did not know what we would need from each other. Love your parents, cherish your wife, take care of your children, and keep a group of shipmates. Stay in touch with them, but do not impose.