I heard many stories about ships that I served in that were hard to believe. This one was told to me when I was mess cooking ass an SA. I had no reason not to believe it. 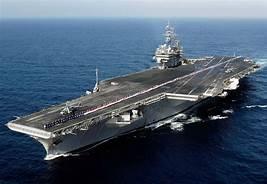 The supercarrier USS Kitty Hawk (CV-63), formerly CVA-63, was the second naval ship named after Kitty Hawk, North Carolina, the site of the Wright brothers’ first powered airplane flight. Kitty Hawk was both the first and last active ship of her class, and the last oil-fired aircraft carrier in service with the United States Navy.

Kitty Hawk was laid down by the New York Shipbuilding Corporation, Camden, New Jersey, on 27 December 1956. The ship was launched on 21 May 1960, sponsored by Mrs. Camilla F. McElroy, wife of Defense Secretary Neil H. McElroy. Kitty Hawk was launched by flooding her drydock; the conventional slide down method was ruled out because of her mass and the risk that she might hit the Philadelphia shore on the far side of the Delaware River.

With the decommissioning of Independence on 30 September 1998, Kitty Hawk became the United States warship with the second-longest active status, after the sailing ship USS Constitution. (Enterprise passed her in 2012; these two aircraft carriers were two of the three carriers to fly the First Navy Jack.)

For 10 years, Kitty Hawk was the forward-deployed carrier at Yokosuka Naval Base in Yokosuka, Japan. In October 2008, she was replaced in this role by George Washington. Kitty Hawk then returned to the United States and had her decommissioning ceremony on 31 January 2009. She was officially decommissioned on 12 May 2009 after almost 49 years of service. Kitty Hawk was replaced by George H.W. Bush. She was stricken from the Naval Vessel Register on 20 October 2017 and will be dismantled. 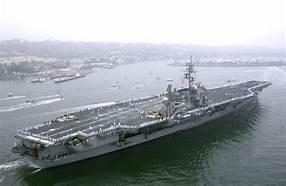 Constellation after the fire in the building dock

USS Constellation (CV-64), a Kitty Hawk-class Super Carrier, was the third ship of the United States Navy to be named in honor of the “new constellation of stars” on the flag of the United States. One of the fastest ships in the Navy, as proven by her victory during a battlegroup race held in 1985, she was nicknamed “Connie” by her crew and officially as “America’s Flagship”.

USS Constellation was heavily damaged by fire while under construction on 19 December 1960. The carrier was in the final stages of construction at the Brooklyn Navy Yard in Brooklyn, New York when the fire began.

The fire broke out when a forklift operating on the hangar deck accidentally pushed its cargo into a steel plate knocking it over. The plate then broke off the plug of a 500 US gallons (1,900 l; 420 imp gal) tank of diesel fuel which spilled from the container reaching the lower levels of the ship. The fuel was ignited perhaps by a cutting torch of a fitter and then moved to a wooden scaffolding. The flames spread quickly filling the passageways of the ship with smoke. A Navy commander commented on the nature of the ship’s design at an inquiry, “Ships of this class are the most complex structures ever designed by man.

It took 17 hours for firefighters to extinguish the fire, some of whom had been “driven to the raw edge of exhaustion” after being called into service in the Park Slope air accident. The firefighters saved hundreds of lives without losing any of their own, however, fifty shipyard workers perished. The extensive damage cost 75 million dollars to repair, and delayed the commissioning date by seven months, leading to a rumor that the ship that had burned in New York was Kitty Hawk (CV-63) and the fire caused the Navy to change the names and hull number designations between the two sister ships that were being built simultaneously in separate shipyards in separate states. An abstract of a New York Times article from the day after the fire, 20 December 1960, refers to the ship as USS Constellation.