After the capitulation of Imperial Germany in November 1918, the surviving warships of the German Navy were removed to England for internment. US naval engineers recognized the advances German technology had achieved and were keen to get their hands on some of the Kaiser’s submarines. And as part of the armistice negotiations, six interned U-boats were allotted to the United States as booty of war. Stipulations required that these boats be destroyed within one year, and, at least publicly, they were authorized to be used only in a government campaign to promote the sale of Victory Bonds. 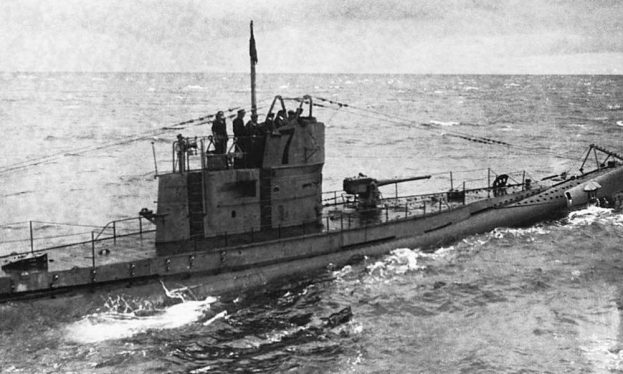 On 23 March 1919 twelve US Navy officers and 120 men arrived in Harwich, England, to take possession of our U-boats. All six were commissioned into the United States Navy under their German designations and grouped into a special squadron, the Ex-German Submarine Expeditionary Force. American sailors began a crash course in U-boat handling and completed preparations to get underway. USS U-164 proved too badly damaged to be made seaworthy, and at the last minute a seventh boat, U-111, was substituted in her place. On April 3rd USS U-117, UB-88, UB-148 and UC-97 put to sea. In company with the tender BUSHNELL (AS-2), they steamed to Ponta Delgada in the Azores and thence to Bermuda and New York City. U-140 had preceded the others out of port by a few days but broke down at sea and had to be towed to New York. U-111’s crew worked feverishly to get her underway on April 7th.

Upon its arrival, this day the squadron was deluged by New York’s citizens, newsmen, tourists, photographers, civilian and Navy engineers. From there they immediately embarked on the Victory Bond campaign, being dispersed to various ports along the US coast (while our Navy quietly conducted extensive evaluations and testing). The public saw these prizes of war as the material embodiment of American military prowess and throngs of the curious lined up at each port. UC-97, a minelaying sub, proceeded into the Great Lakes under LCDR Charles A. Lockwood (future WWII SubPacFlt commander) where she weathered a minor scrape with Canada over protocol. USS UB-88, a small coastal sub, drew the longest itinerary. She started the Victory Bond tour from Savannah and visited ports from Florida to New Orleans. From here she cruised up the Mississippi to Memphis, then turned south to the Texas coast. Transiting the Panama Canal, she reached San Diego on August 29th. She promoted bonds as far as Bremerton then was laid up at San Pedro on 6 November. Dismantling commenced on all six in 1920, all were ultimately expended as targets. Even in this last role, they earned fame. U-111 and U-117 were sunk in BGEN Billy Mitchell’s first demonstrations of naval aerial bombing in 1921.