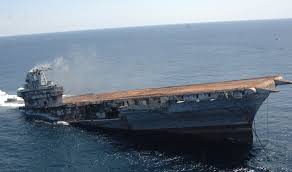 A passage from “John Brown’s Body”

The sinking of the world’s old sea-bitten names,

Galleys of Antony, galleys of Carthage,

Argos and argosies and the Achaean pride,

Moving to sea in one long wooden wall

Behind the huge ghost-flagship of the Ark

In such a swelling cloud of phantom-sail

They whitened Ocean–going down by the head,

Spreading along the scrubbed and famous decks,

With the sea-horses of his sunken dreams.