I came in the Navy in the early ‘60’s, at a time when the ’43-’47 enlistees were approaching their twenty years. It was not uncommon to see a Designated Seaman or a Third Class Petty Officer sporting four hash marks. Many of them could barely read or write and a few were totally illiterate. I knew a few of these men. They were generally good hard working men, satisfied with their accomplishments and proud of their abilities.

They are non-existent in today’s more modern Navy with push button Third Class Petty Officers and the up or out promotion policies. But there once existed sailors who had unofficial authority garnered by their abilities, their knowledge and their presence.

I’ll talk about three men I met in the early days of my career. There was a Second Class Commissaryman at NAS Lemoore. His name was Mack, we called him “Pappy.” He had enlisted in 1944. At the time black men could only enlist as Stewards Mates. Pappy told me that he was a TN (Steward Seaman) for ten years before he was promoted to Third Class and permitted to cross to the Commissaryman rating.

Pappy took me under his wing when I moved from the Bake Shop to the galley. He taught me to cook. Working with him, I discovered that he could barely read. He would tell me, “Get the recipe card and read it to me while I chops these onions or pan up this stew.” There was always a reason he was too busy to consult the recipe. He would say, “Fill in the worksheet, I don’t have time.”

I asked him once if he could read. He told me, “No, I never went to school when I was a young’un. My Pappy was a sharecropper and I worked the farm and took care of the critters. My Mama, teached me my numbers and some readin’, but it never stuck with me.”

I asked him how he took the tests. He told me he just guessed at the answers. He considered himself lucky to have made third class and many years later Second Class by a fluke.

Pappy proudly retired in ’63 with nineteen years and constructive time. Another cook and I went to the bus station in Hanford to see him and his wife off to Montgomery. 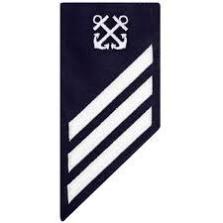 Pico was a BMSN in USS Vesuvius. He was a Navajo Indian from New Mexico. When I first met Pico, his Dress Blue Uniform sported a gold BMSN patch and four hash marks. He was the Leading Seaman of Deck Force and wandered the decks with a coffee cup in his hands encouraging, cajoling, and sometimes physically ensuring the work was being done properly.

Pico was nearing retirement on twenty. He had spent his entire Navy career on tankers and ammunition ships. There was nothing he didn’t know about rigging. I saw two BM1’s discussing the proper way to rig for a certain evolution. Neither was sure of the proper rig. They went to the Chief and he said, “I’m not sure, let’s go ask Pico.”

Pico could not read or write and had never taken the BM3 exam. The XO wanted Pico to retire as a BM3 and got permission to render an oral exam for advancement. The XO and the BMCM gave Pico the exam in the XO’s stateroom. Pico made BM3 six months before he retired. The Chief told me that Pico had probably aced that exam.

Shortly before Pico retired, a BM2 who was also retiring told Pico that a San Francisco shipyard was hiring if the applicant could splice wire. He was excited and told Pico, “You can make good money with this job.”

“Go back to the reservation and be a rich fucking Navajo.” Pico retorted.

Pico told me at his retirement party at the Bank Club in Port Chicago that it was the first time he had worn civilian clothing since he enlisted in ’43.

The third individual I’ll talk about was a CS3 named Ike. Ike was my mentor in Vesuvius and my running mate. I was a Seaman and Night Baker when the ship was underway and working for Ike in the Galley when we were in port and buying pastries and desserts from a commercial bakery. Ike was the Watch captain and I was his striker.

The ship was at anchor in Yokosuka the day I was advanced to CS3. Ironically that was the same day that Ike was reduced in rank to CSSN. He had shacked up on the beach, fell asleep and missed the midnight boat back. He just decided since he was in trouble, he may as well take a couple more days.

Ike had made Third and been busted a few times. He still had uniforms with the SN patch. Ike told me the first time he was busted from CS3, he moved to Deck Force and actually made BM3. He and another BM3 had been UA for a couple of weeks. He was busted to SR and served thirty days in a Redline Brig. Upon being released from the Brig he was ordered to a tanker where he was assigned as a Mess Cook. Once they discovered he could cook, he was back in the Commissaryman rating.

With my advancement and Ike’s demotion, our roles were reversed. I became the watch Captain and Ike became my striker. In all actuality, Ike ran the watch while I was learning. I was smart enough to seek his counsel.

I remember Ike telling me, “You are a Petty Officer now. You gotta treat those Snipe Mess Cooks that you pal around with like non-rates. You can’t have no favorites.”

A Seaman taught me how to be a Petty Officer.