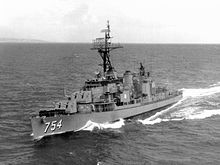 Written by a shipmate and shared by me.

It was 50 years ago today that I assumed the mid watch, mid – 0800 on 3rd Jun 69 in radio. My ship was the USS Schofield (DEG-3). My ship was in Desron 23 along with the USS James E. Kyes, USS Bronstein, USS Walke, USS Everett F. Larson, and the USS Frank E. Evans. We were on a SEATO exercise in the South China Sea and in company with the HMAS Melbourne, an Australian aircraft carrier. The Evans was in front of the carrier and told to assume plane guard duty 500 yards behind the carrier.

Approximated 0313 we received a flash message from the Melbourne. That flash message was and has to be the most shocking message I ever received. The message said that the Evans was in a collision with the Melbourne and the front half of the ship was on its side. I put the message on the message board and hauled my behind to the captain’s cabin and pounded on his door. I told him the Evans was in a collision and showed him the message. He signed it and said to keep him informed.

A few minutes later we received another message from the Melbourne indicating that the Evans sank. I hauled my behind back up to the captain’s cabin and didn’t knock this time but rushed through the door, opened of course, and shook the captain and told him about it. He signed the message and went to the bridge.

The exercise was canceled as well as our port visit to Thailand. We were on a search and rescue mission for the next 5 days looking for bodies and/or survivors. Unfortunately, we found nothing. 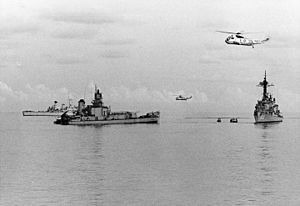 On that morning of 3 June 1969, 74 men lost their lives and are in a watery grave at the bottom of the South China Sea. Today we should remember those brave men who lost their lives in such a horrific way.

May they rest in peace!