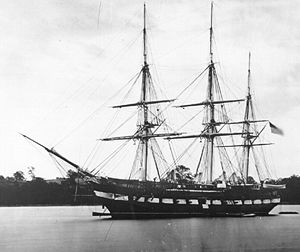 In 1826 our newly elected 6th President John Quincy Adams amplified his predecessor, James Monroe’s, desire to project a US presence into the wide Pacific. On 3 September 1826 Quincy Adams’ Secretary of the Navy, Samuel Southard, dispatched the newly commissioned sloop USS VINCENNES, 18, under Master Commandant William B. Finch, and the 44-gun frigate BRANDYWINE from Norfolk around Cape Horn to join a growing number of US warships protecting American whalers in the Pacific. For several years VINCENNES thus cruised the Pacific. In June of 1829, she received orders to call on the Society Islands and the Sandwich Islands (modern Hawaii). Adams wished to cultivate the friendships with King Kamehameha and other South Pacific chiefs that Master Commandant Thomas Catesby ap Jones had fostered during the PEACOCK, 18, the cruise of 1826. VINCENNES next got underway for Macao, China, then on to Manila, where she made landfall on 29 January 1830. She had cruised over three and a half years before she was finally ordered home via the Cape of Good Hope for a much-needed overhaul. On this date, VINCENNES arrived in New York after brief stops at Capetown and the island of St. Helena. During the voyage, Finch discovered two previously unknown islands and corrected existing charts when he sailed across the charted location of a third. The course of her travels during this 4-year cruise earned her the distinction of being the first US Navy vessel to circumnavigate the Globe. Finch did not fail to recognize this latter achievement, stating of circumnavigation, “none is more trying to a ship’s qualities, hull, rigging and spars, and only such vessel as is most perfect in every respect, ought to undertake it.”

Navies have used world cruises as a show of force and capability. For example, we announced our facility for steam-powered cruising with our first mechanically powered circumnavigation between 7 December 1878 and 9 November 1880, when Commodore Robert W. Shufeldt and the screw sloop TICONDEROGA made a well-publicized good-will cruise. The ability to move an entire fleet anywhere in the world was demonstrated by the cruise of Teddy Roosevelt’s Great White Fleet in 1907-09. Years later the Cold War brought more demonstrations of US Naval might. CAPT Edward L. Beach and the nuclear submarine Triton (SSN-586) followed the route taken by the explorer Ferdinand Magellan in the 1520s and on 10 May 1960 completed an 84-day world cruise–submerged. Then in October of 1964, our Navy’s nuclear prowess was further highlighted when BAINBRIDGE (DLGN-25), LONG BEACH (CGN-9) and ENTERPRISE (CVAN-65) completed Operation Sea Orbit, a two- month, 30,000-mile un-replenished surface circumnavigation.

ADDITIONAL NOTES: The first American Flag to circle the Globe actually predates VINCENNES by 40 years. From 1787-90, a civilian Captain named Robert Gray carried our Flag ’round the world on two ships, beginning on the merchant sloop SS Washington which he sailed to China. There he assumed command of the merchant ship SS Columbia to complete a voyage that covered 41,899 miles.